National’s friends are in unison complaining that the Government should be announcing now when we will be back into Orange.  It seems that every day different media interview restaurant owners and business owners complaining about the lack of certainty.  Opposing voices are few and far between.

This morning two particularly strident voices were heard and amplified.

Barry Soper in the Herald said this:

Jacinda Ardern seemed to me to give every indication during her round of media interviews yesterday – which didn’t include Newstalk ZB unfortunately – that we could expect some movement to the country’s red light setting that’s been frozen for the past several months now.

The PM waxed about how the peak had been reached in Auckland and Wellington and that the hospital system, that they’ve had years to fix, wasn’t overwhelmed.

It was with a sense of guarded relief that restaurateurs thought people could begin moving around inside, rather than being stuck to their seats, and that event planners could start planning on crowd sizes increasing from the impossible to manage indoor restrictions.

You can imagine how disappointed they then were as they tuned in to hear from a Pulpit of Truth that seemed to have reverted back to the Delta days, with Ashley Bloomfield standing at Ardern’s side as she put a dampener on things.

Only in Soperworld is a review a guarantee that things will change.

He complained that with the infection trajectory declining things should be loosened up.  His priority was for businesses  to have “clarity and certainty”.

He said there should be a “test to work” regime and that the seven day stand down period should not apply.  I hate to break it to him but people often continue to shed the virus for up to two weeks after recovering.  If it was a test to work regime most periods away from work would increase.

These claims that there is no clarity should not be taken seriously.  The Government did announce a roadmap when it announced the traffic light system.

The conditions for Orange is that there is Community transmission with pressure on the health system and the whole of the health system primary care, public health, and hospitals, is focusing resources but can manage.

Things are improving.  Clearly in Auckland the peak of new infections has passed.  And hospitalisations appear to have peaked although numbers have not dropped recently. 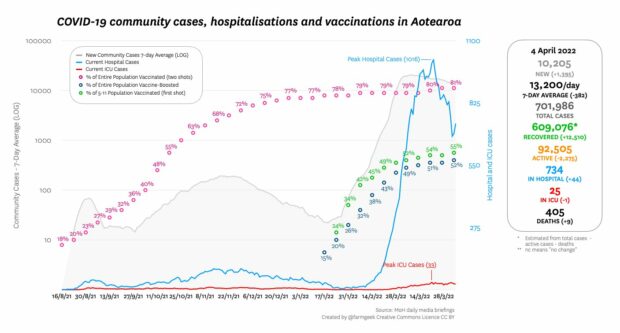 But there is still significant pressure on the health system.  And in the middle of a pandemic why would you confidently announce the loosening up of requirements even though the pandemic is still having a significant effect?

This is magical thinking by business, that changing to orange will somehow make everything better.

And it should be noted that the Government has loosened up the settings and the red level now is much easier on businesses than previously.

As previously said on RNZ’s mediawatch:

“It goes back to magical thinking about what the alternative was to elimination or tightly controlling the virus. It was never going to be ‘sure the hospitals are full, and sure, 1 in 20 people in the city has Covid right now that we know of, but I’m still going to go out and pretend there’s nothing different from 2019’. It was always going to be ‘well hang on, there’s a pandemic, I’m going to do things a bit differently’. Congratulations, we opened up. This is living with Covid.”

Those insisting on certainty are also those insisting that things return to normal.  I understand their desires for normality to be returned.  But right now is not the time to think that ignoring Covid will somehow make it go away.

The biggest threat is a new variant.  As said by Jacinda Ardern two weeks ago:

We do have an ask for everyone though. If a variant arises in the world, that evades vaccines or is more deadly, contact tracing will once again provide a critical role. Please stand ready as a business to stand up QR codes again, or as a citizen to pull out your tracer app at a moment’s notice. Don’t remove the app from your phone just yet.

With the emergence of a new XE variant that is potentially 10% more transmissible than Omicron we are not out of this yet.

And to everyone complaining about the Government’s refusal to loosen up things please pay attention to the most important statistic of them all.

Dying *of* COVID vs dying *with* COVID can be complicated.

You know what's not messy? Total excess deaths per million. So how is New Zealand faring so far?

It turns out, keeping COVID out until the population was vaccinated was a GOOD idea. pic.twitter.com/zBrSvzHZRP