Why the Wellington protestors are wrong 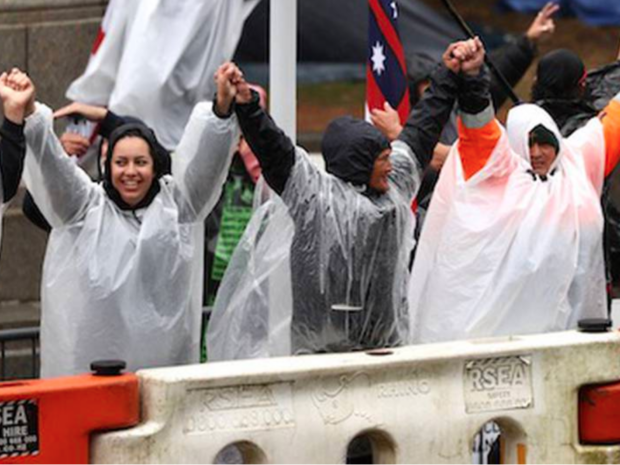 I recall clearly as a 19 year old who majored in Springbok Protests 101 in my second year at University that time when the protest marshalls had us sit down in the middle of Queen and Wellesley Streets when we were marching downtown.  Suddenly the police who accompanied us became animated.  We stayed down as the rest of the march walked past us.  When the end of the march had gone past the Police then got into formation ready to clear us.  With some personal relief the marshalls then had us stand up and continue.  But clearly they were preparing us for future protests where blocking main roads would be an option.

Future protests had people being willing to block roads or motorways but the kaupapa was always clear.  You should only do this if you were prepared to get arrested and charged.  I always deferred as I was either a law student or a lawyer.  Convictions are not career enhancing.  When I retire I plan to celebrate by engaging in direct action protesting about climate change.  But I have no expectation of preferential treatment.  Civil disobedience includes the likelihood of arrest.

My frustration about the current Wellington protest is that they are oblivious to consequence.  At protests that I attended we would never dream that not only could we occupy significant public areas but we would expect to park on the road outside.  This is absolutely bonkers.

This is where the police have failed.  Not insisting on the roads being cleared on day one has led to this situation where more and more protestors think they can park right outside and join the fun.

The planning and organisation suggests significant resources are available.  I have never seen a protest where free food trucks have miraculously appeared, where one of the organisations has used multiple commercial billboards to publish its misinformation and where a law firm is on retainer to persuade a victim of protestor violence that .

And while I am at it can I say how deeply dishonest the framing by the right has been.  Any attempted equivalence between Trevor Mallard’s playing of Barry Manilow with reported instances of death threats, Nuremburg references, abuse of media and the public and defacing of the people’s house of representatives does not stand scrutiny.  And how there can be meaningful dialogue with a group calling for the overflow of the last election result is beyond my comprehension.

Ad has in an impassioned post urged us to understand and sympathise with the protestors.  I get that. We have all been through a horrendous two years.  Overseas this has been accompanied by thousands of deaths.  Here we have been lucky.  But saying this repeatedly is carrying less weight.

As I watch many ordinary kiwis expression of concern I get that they are distressed.  This is not so much against the mandates but against Covid.  They want Covid to be gone.  And when they win life will be back to normal.  If only it was so simple.

As Darien Fenton points out there are many, many more ordinary kiwis who have been vaccinated, who socially distance and who look after each other.  These are the real heroes.  This is why our Covid response has been so extraordinary.

I get the protestors’ passion, at least those who are not actual nazis who can go to hell.  They want the past two years finished and they want to get back to normal life.  If only it was this simple …

I have sympathy for [some of the protesters], and there is no doubt many are offloading a lifetime of feeling on the outer, many (particularly Māori and Pasifika, beneficiaries and the lowest-paid) with real grievances about the way they’ve been treated by state institutions. They’ve felt powerless and see the Covid response as taking away what little personal power they have left, much as we all do at this time. And yes, some have lost their jobs to mandates, which is tragic on several levels.

But I do believe their grievances and distrust have been manipulated – and I wonder if they realise that the people driving the worst of this don’t give a damn about them, using them as fodder for the bigger, far more scary scenario currently playing out here and around the world: a desire to end progressive left-leaning politics and social democracies, and, in the case of our PM, a misogynistic hatred for being told what to do by a savvy young woman.

Sadly, all this has little to do with vaccines. Instead, as we’ve seen in the US, anti-vax views are hijacked to promote a dangerous far-Right agenda, exploiting Aotearoa’s democratic freedoms to promote an anti-democratic movement from overseas. It’s deeply concerning to see such ugliness slipping, virus-like, through our borders. As with Covid, we must calmly quarantine it for the good of all.

This activity meets a broad definition of an attempted coup.  Impeding the working of the people’s house of representatives from functioning properly, threatening to hang politicians, attacking media and demanding that the duly elected Prime Minister resigns is really crazy stuff.

72 comments on “Why the Wellington protestors are wrong ”