Young Nats run away from public debate on TPP

Realising the impossibility of defending the indefensible, the Young Nats have run away from an opportunity to participate in a public debate on the merits or otherwise of the TPP.

The Young Nats were called out by Christchurch activist Josie Butler who challenged them to a public debate. Surprisingly and refreshingly, the Young Nats initially agreed. A date was set, a venue booked, and promotion of the debate under way.

Meanwhile, the Upper Hutt City Council’s decision to declare its city a “TPP-Free Zone” is looking wiser and wiser. An expert, peer reviewed, paper on the implications of the Trans-Pacific Partnership Agreement (TPPA) for local government was released on Tuesday. The paper was co-authored by former city councillor and chair of Watercare Services, Tony Holman, former Member of Parliament and Auckland city councillor Richard Northey, and Professor Jane Kelsey from the University of Auckland, and peer reviewed by Dean Knight, senior lecturer in law at Victoria University of Wellington and an expert in local government law.

There’s heaps in the paper worthy of serious consideration by all New Zealanders. Its the sort of information which will not be made available at any of National Ltd™’s  high-pressure sales tactics MFAT propaganda roadshows.

Just to pick a few of the points raised in the report . . .

1 – “The binding and enforceable rules of the TPP go further than any previous such agreement and will impose new constraints on local governments’ authority and autonomy to regulate and make decisions. Every local authority will have to comply with complex rules across many chapters, and decisions they make that impact adversely on foreign investors will potentially be open to challenge through the investor-state dispute settlement (ISDS) mechanism.”

2 – “Investors from TPP countries will have the power to challenge local government decisions that damage their commercial interests, including disputed procurement or PPP [public private partnership] contracts, planning and consent processes, or blocking price increases for utilities like water or sanitation. …The contracting out of services, greater use of PPPs, including for water, and asset sales will intensify the exposure of local government to the TPP and heighten the risks of investor-state disputes over disputed contracts.”

3 – “Water scarcity is a growing problem, heightened by global warming. The rationing of water on a market basis means human rights and social needs compete with and are subordinated to the interests of those with commercial power. Companies in New Zealand, including foreign owned agribusinesses, already hold rights to extract or use water for irrigation, which are valuable investments that can be protected in the investment chapter through ISDS.”

4 – “Tradable water rights are financial instruments that are protected by the investment chapter against changes that negatively impact on their value, and are subject to the non-discrimination rules in the financial services chapter. A more extensive system of tradable water rights would therefore become locked in through the TPP.”

Its not just national sovereignty the TPP undermines, its also the core functions of local government. 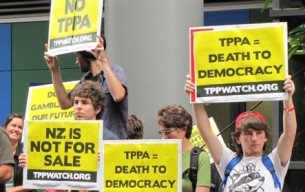