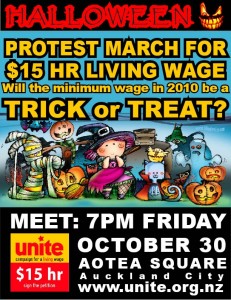 The campaign for a $15 an hour minimum wage is gathering pace.

Initially, Unite kind of set out on their own on this one but I understand they’ve got other unions on boards now.

They need a bit over 300,000 signatures to force the government to hold a referendum. They’ve got until May 7, just over 6 months, to get the remainder (not sure how many they’ve got so far).

Obviously, the 350,000 odd union members are a good place to start but I would say if they can get enough people with enough forms out there they will find a lot of community support too. The other day, I was in a Subway in the evening and the woman behind the counter had a petition form beside the till that she asked all the customers to sign and people were only too happy to do so.

I reckon if we get the signatures, the referendum will be an awesome opportunity for the Left (looking at you, Labour) to promote itself and its vision.

How can you help make sure New Zealand’s lowest paid workers get a living wage? Sign the petition yourself, obviously. Put a copy up in the smoko room too and pass it around at the next union meeting or social event.