A while ago a copy of The Standard (version 1.0 – the old newspaper) from 1938 crossed my (r0b’s) desk. Down through the years, lining a shelf in an old wardrobe. It wasn’t in perfect condition, but still perfectly legible.

In 1938 Europe is on the brink of war and Neville Chamberlain declares “peace in our time”. A minimum wage law is announced in America, and Du Pont names its new synthetic yarn “nylon”. Benny Goodman plays the first jazz concert at Carnegie Hall, and Pete Seeger drops out of college to begin his career as a folk singer.

In NZ Labour was in power, after a resounding victory in 1935. Two Ratana-aligned MPs had merged into the Labour Party (giving Labour a total of 55 seats), the beginning of a long association between these two organisations. Our copy of The Standard is from September 15th, 1938. Exactly one month later Labour, led by Michael Joseph Savage, went on to win the 1938 election (with 53 seats). One year after that NZ declared war on Germany at the start of WWII.

It’s a fascinating document, this 1938 copy. The Standard of old was a significant and powerful newspaper, very much more so than the minor amateur blog which now bears its name. I’d like to post (weekly on a Sunday) a section scanned from 1938. Just stuff, sometimes significant articles, sometimes advertisements or whatever, random voices from the past. I hope you’ll enjoy the wander. Some things change, some stay the same. 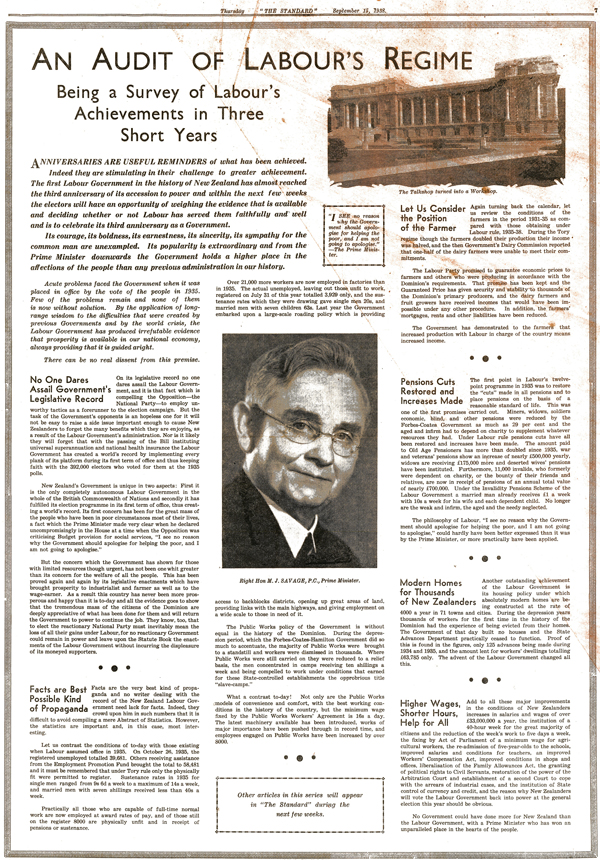 “I see no reason why the government should apologise for helping the poor, and I am not going to apologise” — Michael Joseph Savage, September 15, 1938.