According to this study carried out over a 27 year period on nature reserves in Germany, the volume of flying insects in summer has plummeted by about 80%.

Quite a few articles of late have made the observation that the days of the car windscreen being ‘bug splat city’ of a summer evening’s drive seem to be thing of the past. And I think many would say the same about the congregations of flitting moths that used to dance around outside lights left on at night.

According to this study  by the US Dept of Agriculture, we can sensibly suggest that the nutritional content of plants has dropped by about 30% since the beginning of the industrial revolution  (ie, since 1840 or thereabouts).

Off the back of insect numbers taking a dive, bird numbers are taking a dive too. So for example, starling numbers are down by about 80% across the UK since the mid 1970s,  and they are now on the endangered list (red listed). You can go through google keying in various birds and the change in their population if depression is your fancy.

Various media commentators have been putting these crashes in bird and insect populations down to farming practices and our use of agri-chemicals. Now, not to put too fine a point on it, but that argument’s bullshit. Yes, mono-culture and the use of insecticides most definitely affect insect and bird populations. But the declines are global and not limited to heavily farmed areas, or countries employing modern, chemical reliant modes of agriculture.

From this article (Yale University) – “According to global monitoring data for 452 species, there has been a 45 percent decline in invertebrate populations over the past 40 years. DIRZO, “Defaunation in the Anthropocene” – SCIENCE (2014)” 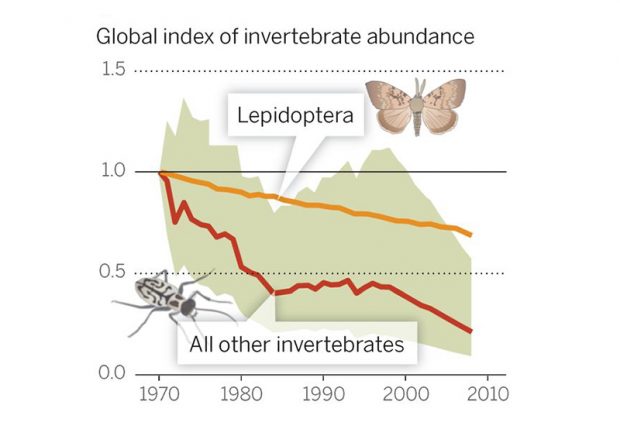 The common global factor affecting insect numbers, isn’t mono-culture or chemical use, but atmospheric levels of CO2. High CO2 levels induce plants to accumulate more sugars at the expense of protein. And we know what happens in that scenario. We know that increased sugar levels and diminished protein levels equates to increasing degrees of malnutrition and death. We could flip over to various sustainable farming practices tomorrow morning, do it across the entire world, and insect numbers would keep dropping.

Table (a) and (b) below show the shift in the carbon /nitrogen ratio (essentially the sugar/protein mix) of goldenrod samples from 1840 onwards in response to CO2 levels, and  the resultant drop in the plant’s protein levels. 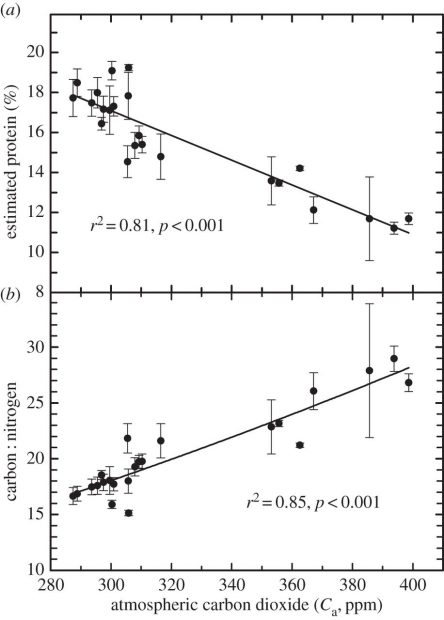 Since the more recent drop in nutritional content of goldenrod tracks the drop in other studied crops/plants from the past 40 years, it would seem safe enough to assume those other plants/crops (that we have no historical samples extending back to the 1840s for ) would show a similar long term decrease in nutritional content as that exhibited by goldenrod. That being the case, insects that rely on plants as a food source are pretty well screwed. And as a consequence, any plants that rely on insects for pollination are pretty well screwed. And anything that relies on insects as a principle food source is likewise screwed. Not only that, but the poor of our own species whose main source of protein is from plants, yup, you got it – they’re screwed.

So yeah. Maybe sugar coating the world by sparking up every bit of fossil we can lay our hands on isn’t such a good idea after all. Not that you’d pick that up from any government policy in any part of the world that’s supposedly designed to head off global warming.

Policies proclaiming no new internal combustion engines for sale by 2025, ’35 or whenever; net zero emissions by 2050 by way of trade or tax or whatnot; and any other damned thing I’ve come across by way of government action on global warming are so far wide and so far short of the mark, that the policy makers and the politicians behind them ought to be, at the very least dragged through the streets to stocks where they can be pelted and buried under whatever increasingly useless starchy fruit and vegetable we can lay our hands on – at least while we have enough insect pollinators around to provide us with ever more starchy fruit and vegetables.

But you know that what we do now is what we’ve always done before and will probably do in the future.

We’ll continue to be party to a general culture of encouragement that claps and yelps for the brave foresight of stupid politicians and idiotic policy makers whose policies explicitly and primarily promote this economic and cultural shebang before all else. And we’ll continue to snatch at the false hopes that high-ride on the magical thinking behind the latest “techno-fix“. And we’ll do that because we’d much rather entertain notions of human indomitability and of ‘progress’ than open our eyes to the yawning chasm of physics that sits between us and the future.

42 comments on “A Sugar Coated World ”