A Tale of Two Droughts 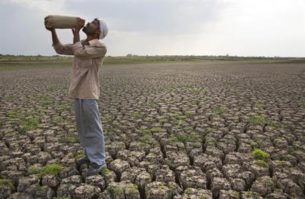 This is how the MSM headlines the story. The area of Marathwada is being hit by low rainfall due to climate change. That there is less rainfall is not in doubt, but also underlying the drought are other factors more immediately in the control of humans.

As well as issues of mismanagement, politics and industry there are vicious cycles. One is the pressure on farmers to use their land for cash cropping and thus surrender their food sovereignty. Instead of growing crops appropriate to the climate and landscape to produce food for themselves and selling surplus to their community, the market dictates they grow export crops like sugar cane or cotton that need much more water. In drought years the farmers take on debt to increase irrigation. Eventually they have too many low rainfall/crop failure years in a row and can no longer service their debt. Suicide is becoming more common, and people migrate away to take jobs in the city. Another cycle is that the less rainfall there is, the more wells are dug, which leads to further lowering of the water table, making the area even less resistant to drought as the land dries out.

But this is an area with an average annual rainfall of 600 – 800mm. This is not arid country (e.g. Dunedin gets 726mm). Even with climate change there are still quantities of water falling on the ground.

Here’s another headline, one we don’t see,

Hiware Bazar is a village of 1300 people and lies in the same general drought-prone area of Central India but is much drier. In the 1980s, after decades of crop failures, the village designed a collective water management system that restored agriculture and enabled multiple social and economic benefits for the local people.

The key principles are this (system explanation here, starts at 4:40):

In the upper reaches of the catchment water is harvested by ponds, contour trenches and mass tree plantings. These store water in the ground beneath them which both hydrates the soil enabling plant growth, and eventually replenishes the water table. This then in turn revives the wells in the village. 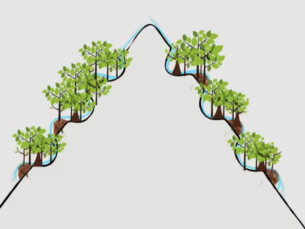 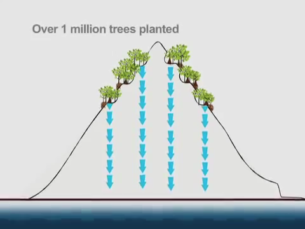 In the middle reaches, small earthen berms (bunds) are built to catch any run off from the catchment above. Water either infiltrates the land (and further recharges the water table), or is stored in channels beside the berms. 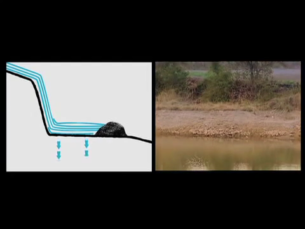 In the lower reaches flat farmed land is surrounded by berms so that rainwater is trapped and seeps into the soil. They also use storage dams. 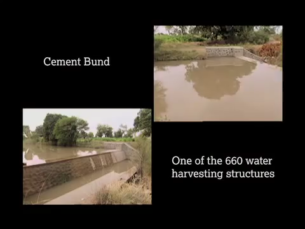 In addition to the food growing areas, similar techniques are used beside the village, leading to the amount of irrigated land rising from 40 ha in 1992 to 550 ha in 2009.

As well using sustainable technologies, the changes were made possible by cooperation and collective decision making. The village set limits on bores that allowed the groundwater to rise from 18m deep to 4.5m. The village council measures the level of water in wells and storage tanks and then decides on what crops are appropriate to grow that season. Villagers have agreed to not grow water-intensive crops. Even with low rainfall of 250 – 300 mm, they can still crop potatoes and onions.

Changes to stock grazing have increased grass production for fodder from 100 tonnes to 8,000 tonnes, resulting in better prosperity for the local dairy co-operative. Flow on benefits include solar power, sanitation projects, and biomass plants for fuel, electricity and manure. Economic migrant families returned to their land from the cities. One member of the village council describes themselves as being free from climate change threats, and attributes this to having worked collectively for the past 20 years.

These are medium and long term strategies for sustainable management and creating resiliency in the face of climate change. They don’t help the people in immediate need of aid, but it’s worth knowing that in the first year Hiware Bazar tripled its area of irrigated land and that such systems can be put in place within a few years. Much of what we call drought is mismanagement of both land and water resources. Despite the geographical, political and cultural differences the lessons for New Zealand are glaring and salient.

44 comments on “A Tale of Two Droughts ”