A topic for the NACT talk-fest. Needs a slogan for success.

My favourite indicator for a deep recession is showing up. The applications and enrollments for colleges and graduate programs appears to be significantly up in the east, west, and south of the US and Canada. Probably something similar is happening here but we are unlikely to know until later this month.

The reason that this is significant is twofold. Entrants to the workforce are usually the first to notice that it is harder to get work, and people who are finding a problem getting work will often start to retrain. It also involves a significant investment of time and money (especially in the US). People who aren’t particularly committed to education will usually leave it at the bottom of the list. So you get extreme spikes in enrollment numbers when recessions start to bite hard. Usually this will happen earlier than unemployment figures show up.

Of course this usually increases the costs on the public purse and often elicits a rather daft cost-cutting response from right wing governments. Rather than treat this as an opportunity to upskill their workforce to reduce skills shortages in the next upturn, they start to cap enrollments. It would be great if our new and rather lethargic right wing government got proactive and increased funding prior to the need being retrospectively apparent.

Now we know that the NACT government responds best to having a meaningless phrase that they can craft legislation and programmes around. This appears to be the only common denominator for the flurry of undem 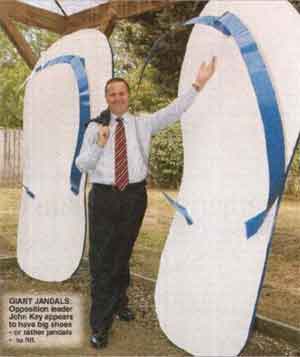 ocratic urgency in the house prior to Christmas. To my eye it looks like a short phrase was required for the checklist so that it could be ticked off. If the phrase was too long then it didn’t make it on the list.

However I can’t think of a good short slogan for “lets use the recession as an opportunity to upskill the workforce before the next bull market”. I feel that it is absolutely critical that we find a good one. Then JK and the rest of the lethargic NACT bunnies can sprout it off at their upcoming talk-fest and might actually do something useful. While it is unlikely that they can do much about jobs – they can do something about the upcoming education  shortfalls.

Anyone got a suggestion in the right wing style for a good slogan for our special flip-flopper?

13 comments on “A topic for the NACT talk-fest. Needs a slogan for success. ”