It seems DPF, Cameron Slater and John Ansell have pooled their collective genius and come up with a new campaign. Apparently they had some money left over from their earlier ramshackle PR fiasco so they’re putting up more anti-Labour billboards as the Free Speech Coalition: 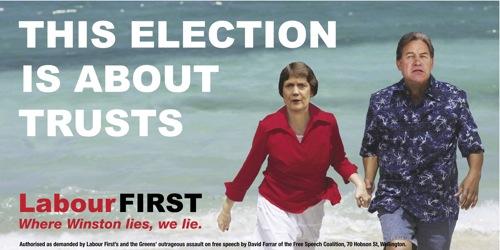 I have some advice for them:

1. Pick an issue that is current, not two months late.

2. Make your message clear rather than speaking in code to the already converted.

3. Follow the lead of National and ACT and get rid of John Ansell.

4. Make sure you time your run early enough that your ads don’t get lost in the last two weeks (which is when all the focus is on National and Labour and even the smaller parties are struggling to get cut-through.)

Apart from getting all that wrong and their billboard being a bit stupid the boys are doing fine. Well, almost fine.

According to Dean Knight they are in breach of the implied rules of their own trust, which state:

‘Q. What do you plan to do with any donations
A. We want to spend it all on an advertising campaign informing New Zealanders of the details of the Electoral Finance Bill, and what effect it will have on them if passed.’

‘Q. What will happen to any funds left over, if the Bill is defeated?

A The ultimate beneficiary of any surplus funds is the Commonwealth Press Union.’

So DPF and Slater are dipping into their trust’s funds for a personal project? Oh, the irony.