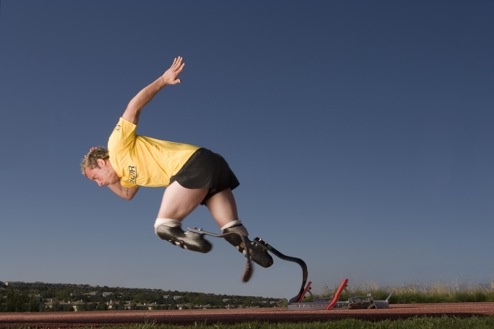 Oscar Pistorius now the chance to become the first amputee to compete on the track at the Olympics.

The 21-year-old who runs on artificial carbon fibre legs has been cleared to compete at the Beijing Olympics if he can make the qualifying time (he needs to take about a second off his personal best).

Initially Oscar was barred from competing because it was felt that he had an “unfair advantage” over other competitors: the elongated carbon fibre running blades in place of his lower legs allow him to cover more distance per stride and aren’t vulnerable to the biochemical limitations of muscle. On the other hand, his supporters claim that the limbs are vulnerable to wind and rain and that he must expend more energy to start running.

There seems to be genuine scientific debate about whether he currently has an advantage or not. On balance things seem about equal. My guess though is that technological advances to the $50,000 running legs will continue and that before too long they will provide irrefutable advantage. What then?

Closer to home, Auckland swimmer and double amputee Nadya Vessey was recently reported to be awaiting fitting of a mermaid-style tail made by special effects company Weta Workshop. Presumably at some stage that could translate into a big competitive advantage. But is the mermaid tail really any different to the controversial new Speedo swimsuits which are claimed to have played a role in 37 world records since their introduction three months ago?

8 comments on “An unfair advantage? ”