On the distribution of income 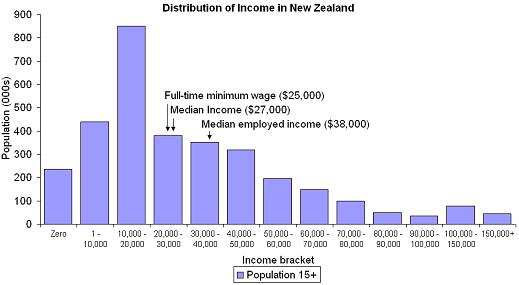 See that line that says minimum wage? Nearly half of kiwis earn less than that.

Seven months ago, that was me. I was working removing asbestos contaminated glue from the floor of an office building along with half a dozen other guys. Now, asbestos is pretty dangerous stuff, inhaling a single thread of it can give you asbestosis, a deadly respiratory disease. So, we had some crappy old masks and some cheap overalls to wear. The areas we worked in were sealed from the outside world and had big fans in them to keep them at low air pressure, so if a leak developed air would flow in and no asbestos threads could get out. The outside temperature was 25 degrees. Inside it was 40 degrees plus and there was no oxygen, as we scraped potentially deadly forty year old glue off the floor. The sweat would pool in your mask but I was afraid to pull it back.

We were effectively day labourers, employed by a labour hire company that contracted our labour (and took $8 an hour as commission from the company); we would be out of a job on the day that the boss decided there was no more work for us (of course, this actually made us work slower because we didn’t want to work ourselves out of a job).

The men I had been working with had been doing jobs like this for years, decades. ‘At least now’, they told me, “we are getting some decent pay” – $11.25 an hour (as was the minimum wage at the time), just eight years before they would have been getting $7.50 an hour and no Working for Families to help them out.

See that $60,000 bracket? Less than 14% of kiwis have incomes higher than that. I’m now one of them. And do I work harder for this great increase in reward? Well, I have a chair, I have a computer, there’s coffee, and air conditioning, I don’t have the risk of contracting asbestosis, damaging my back, or finding my job has simply disappeared, and I get to sit in meetings for hours just letting the conversation wash over me like fresh air, remembering being hardly able to breath in that mask.

So, no, I don’t think this job is harder, and get I paid three times more. I suspect that for most of the people reading this, your working life is more akin to my nice well-paid office job, than that job sweating in a toxin-laden room. It’s very easy in our lives to forget how much better we have it than most.

62 comments on “On the distribution of income ”