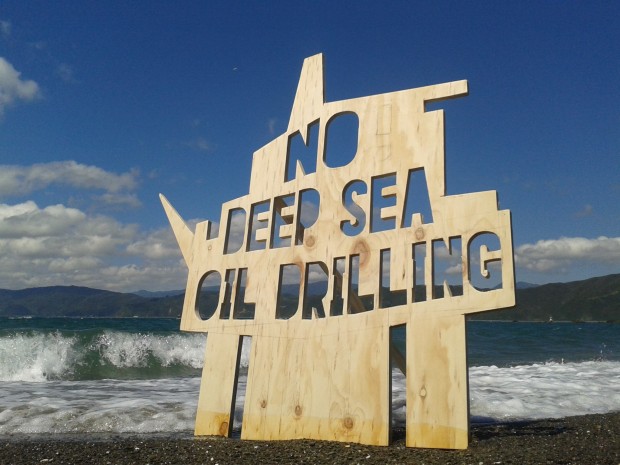 Each year since 2012 the Government has run a process called the Block Offer.  The process is set up by the Crown Minerals Act.  Basically the Crown consults on which areas oil explorers should have permission to explore for oil and gas and following consultation releases grants exploration permits to the oil industry.

Local Government is consulted.  The process has been a focal point for climate change activists.  In Auckland I have been involved in presentations to Auckland Council suggesting that we have to leave the undiscovered oil in the ground and as a minimum the pristine West Coast, the habitat for the endangered Maui’s dolphin, should be spared.

Yesterday Greenpeace presented a 45,000 signature petition to Parliament urging the end of oil and gas exploration.  Jacinda Ardern surprised many by personally accepting the petition.  From Lucy Bennett at the Herald:

Prime Minister Jacinda Ardern has given the strongest signal yet that the days of oil and gas exploration in New Zealand are numbered.

Ardern said the world had moved on from fossil fuels.

The Government is at a critical point in its decision-making over the future of its oil and gas exploration permits.

In a surprise appearance that stunned observers, Ardern appeared on Parliament’s forecourt on Monday to accept a 45,000-strong Greenpeace petition calling for an end to oil and gas exploration.

She asked the climate change activists for more time.

“I ask now for a bit more time. We’re working hard on this issue and we know it’s something that we can’t afford to spend much time on but we are actively considering it now,” she said.

The rationale for not issuing any further exploration permits is clear.  If we are going to do something about climate change then we have to leave undiscovered oil in the ground.

The IPCC has concluded that to prevent irreparable environmental disaster emissions need to be capped so that temperature increases no more than 2 degrees celsius from pre industrial ages.  Any number of climate change scientists have concluded that currently discovered global oil reserves are greater than the amount that can be safely burned.

One lesson of this work is unmistakably obvious: when you’re in a hole, stop digging … These numbers show that unconventional and ‘extreme’ fossil fuel – Canada’s tar sands, for instance – simply have to stay in the ground.  Given these numbers, it makes literally no sense for the industry to go hunting for more fossil fuel. We’ve binged to the edge of our own destruction. The last thing we need now is to find a few more liquor stores to loot.

It appears that Simon Bridges does not share the same level of concern.  From Radio New Zealand:

The Prime Minister should be honest about exactly what her plans are for oil and gas exploration, the National Party leader says.

The government is currently considering block offers for this year’s oil and gas exploration permits, and is not ruling out offering none at all.

But he said you could not turn off the tap to oil and gas overnight.

“That’s the approach I was espousing, a careful transition, but not ending oil and gas permits any time soon and it seems to me that’s actually where, if she’s honest about it, the Prime Minister is rather than this false impression of actively considering the end of oil and gas.”

No one is proposing that the oil industry is going to be turned off overnight.  What is being talked about is stopping exploration.  There can be decades between the commencement of exploration and the drilling of wells so stopping oil exploration will not shut down the industry immediately.

And if we accept that there is already more than enough discovered oil to fry the planet then we need to stop looking for more.

It appears that the oil industry realises that the is a finite period of time for the industry.  In 2016 following a gradual downturn in the oil and gas exploration industry only one exploration permit was granted.

All strength to Ardern.  This is what real action on climate change looks like.  Recognising that there is a finite amount of oil that can be safely burned and making decisions based on this.

83 comments on “Ardern suggests that oil exploration may cease ”