It has been an interesting week.

Australia’s initial response, that it has signed a deal with the US of A and that no help was required was frankly bollocks.  The Trump White House was that annoyed with the deal that it was the only thing that Trump talked about during his initial conversation with Malcolm Turnbull.  After reading the transcript you really get the feeling that very very few Manus based refugees are going to make it to the US of A although apparently some have been approved for resettlement.

But the Turnbull Government is in a difficult position.  The world is looking at Manus Island and the almost universal response is amazement and disbelief at how bad Australia has managed things.

Of course the problem is that Turnbull and Co will be doing polling and focus grouping on the issue and they will realise they are onto a political winner by being belligerent.  I can’t understand it myself but I have been in Australia during general elections in the past and this issue (boat people) strikes a real nerve amongst swinging voters.  Fear and loathing is always a formidable combination.  And which right wing party worries about human rights norms and international obligations when there are votes to gather?

The Turnbull Government is clearly in a bind.  Jacinda has shown it to be a heartless ruthless bunch.  So how should it respond?

Earlier this week it leaked information to a Rupert Murdoch owned paper which allowed it to put its spin on the debacle.  And you have to admire such native cunning.  The spin was that refugee boats are on their way to New Zealand because the Ardern Government is perceived to be a soft touch.

From the Courier Mail:

Operation Sovereign Borders has turned back four boats trying to get across the ditch.

In shock new details, it can be revealed crime syndicates have tried to bypass Australia’s tough immigration measures and attempted to send four boats, carrying 164 asylum seekers, to NZ.

It comes as there are genuine fears within intelligence communities that the direction of Prime Minister Jacinda Ardern who has kept her predecessor’s offer to resettle 150 refugees but has been highly-critical of Australia’s policy may be used by people smugglers to encourage desperate people to risk their lives at sea.

The Courier-Mail understands that “chatter” has resumed among people smugglers who have pointed to the stand-off between Australia and NZ.

It is not know when the boats were intercepted or what country they started from but it is believed they told OSB they were headed to NZ. They were turned or towed back to near Indonesian waters.

The chances of boats making it all the way to New Zealand are remote.  New Zealand’s isolation makes us a very unlikely target.

It is quite possible that faced with the prospect that his boat would be turned back if he said he was going to Australia the captain of a refugee ship told a little fib and said they were going to Aotearoa New Zealand.

The Greens in the Australian Senate then stepped in and expressed support for the Nauru refugees. 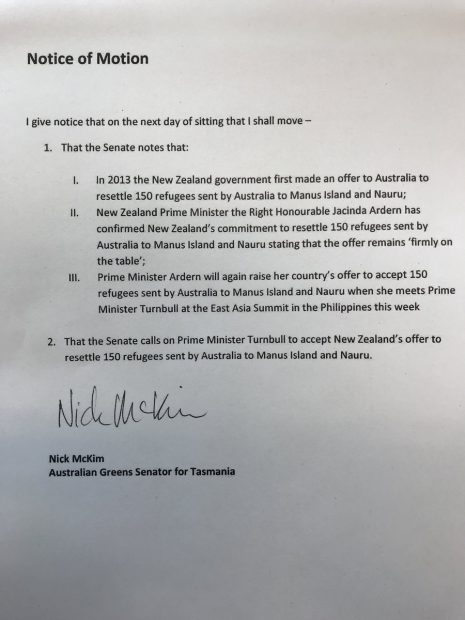 I understand that the Senate has formally passed a resolution of support although I can’t confirm if the wording of the resolution was that proposed by Senator McKim.

Then Ardern countered by pledging $3 million from the Foreign Affairs Aid budget to cover ongoing costs in Manus.  And she managed to get the Australians to agree to work on a process so that if New Zealand’s offer was accepted then it could be instituted quickly.  From Stuff:

Jacinda Ardern has given $3 million of taxpayer money to help refugees on Manus Island.

The money will go to either the Papua New Guinea government or the Red Cross, and will be used to assist the stranded refugees.

Ms Ardern made the offer after discussing the deal with Australian Prime Minister Malcolm Turnbull, who again refused the initial offer of New Zealand taking 150 refugees.

Ms Ardern has discussed the matter twice informally with Turnbull at the East Asia Summit, but did not get the “substantive meeting” she wanted.

However she said she did not get “snubbed”, adding that every time she’s asked to meet with an Australian official about Manus Island, her request has been accepted.

“We believe we have a role to play as members of the international community and as neighbours to Australia, to offer our support in finding a resolution to this situation.”

Ms Ardern said she and Mr Turnbull had agreed to get officials started in a process, so if Australia did take up the offer, it would be able to happen quickly.

Round two of the Australian response has now occurred.  Peter Dutton, and if there is a more reprehensible human being on the planet let me know, has said that if New Zealand helps the Manus Island inhabitants then the New Zealand Australia relationship will suffer.  Strange that an act of humanity should cause a diplomatic incident between long standing friendly nations with so much in common.

My personal opinion is that Dutton is the worst sort of politician, willing to subject non Australian humans to misery for political gain.  There should be a special place in hell for him and his sort.

And he has shown he does not care where they are from.  Kiwi born bikie Aaron Graham beat Dutton twice in the Supreme Court but Dutton still managed to have Graham extradited to New Zealand, even though Graham had spent 40 of his 50 years living in Australia.  The rule of law does not matter for some right wingers.

Australia has gone into full smear mode.  The latest claim is that the refugees at Nauru are paedophiles.  The leaked report did not disclose how many or who.  This leak also brings into doubt the accuracy of what Malcolm Turnbull said to Donald Trump when he claimed the bulk of the refugees were economic refugees from Iran, Pakistan and Afghanistan.

Two ex security guards have chosen to smear the residents.  The moral standing and judgment of people wishing to do this job should be questioned.  And when you subject people to terrible conditions they can do terrible things.  I am waiting for National’s smear machine to start although it appears that it already has.

Of course there is the upcoming Queensland State election.  And the Libnats are seeking second preferences from One Nation voters.  It must be hard for the right to not go full on racist when an election is approaching.

As William O’Maley puts it:

Australia’s offshore warehousing of asylum seekers who approach Australia by boat is not driven by concern about border controls, or about people smuggling, or about loss of life at sea.

Rather, in the context of an electoral system based on compulsory, preferential voting in single-member constituencies, it has become the device by which the ruling Liberal-National coalition seeks to attract second-preference votes from electors who give their first preferences to Pauline Hanson’s racist One Nation party.

The left in New Zealand have chosen to insist that Ardern is not doing enough. Much as I love them I have to respectfully disagree.  I can’t imagine her doing more.  Although I do hope that the TPPA negotiations result in a further improved position for New Zealand.

And there are suggestions that this Government should care instead about the local poor.  As if the drummers have given a damn about their plight during the past nine years …

Brisk hit job by the Turnbull govt on Ardern – leaked a cable about refugee crimes, anonymous criticism of her: https://t.co/36DxgNFsrx

It will take more than @golrizghahraman and the @NZGreens voice in Parliament to get the Government to take immediate action on this issue. Thankful for these brave activists’ show of solidarity. #BringThemHere https://t.co/KYs5pxadi8