Australia, you’re being a dick 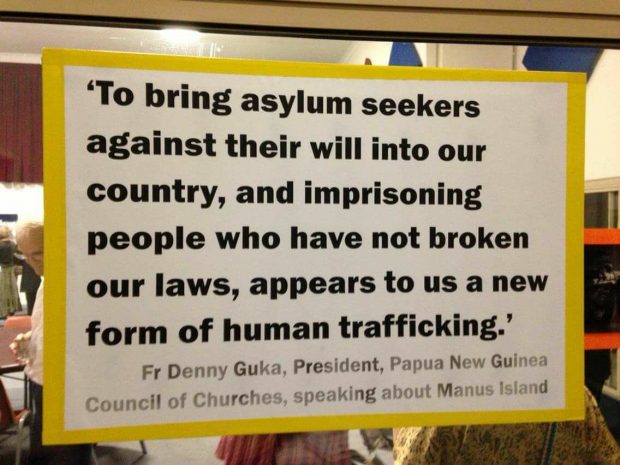 Jacinda Ardern had her first international outing as Prime Minister on the weekend and flew over the Tasman to meet Australian Prime Minister Malcolm Turnbull.

The most important subject related to 600 people originally from third world nations who are on Manus Island in Papua New Guinea.  They are only there because Australia refused to comply with its legal obligation to process people seeking refugee status who present themselves at Australia’s boarder.  Turnbull’s Government claims that deterrence of others necessitates such cruel and inhumane treatment.  But it is strange that a right wing Government, who normally talk about the rule of law as if it is a given, should violate its legal obligations in such a clear and calculating way.

And lets be absolutely clear here.  Yes there is a crisis but it is one created by deliberate decisions by Turnbull and Co.  Deliberately shutting off power and water and stopping the supply of food to the inhabitants of the camp is as inhumane an act as you can think of.

Ardern offered again an original offer made by John Key and apparently accepted by Julia Gillard for New Zealand to take 150 refugees from Australia each year including potentially Manus Island residents.

But this very generous offer has been declined.

The reason?  From Radio New Zealand:

At their first official meeting since Ms Ardern became Prime Minister, Mr Turnbull also declined to take up a renewed offer from the New Zealand government to take Manus Island and Nauru refugees.

About 600 refugees remain holed up on the detention centre, which Australia closed last week.

Australia is coming under pressure over its handling of the situation with the United Nations calling on it to restore food, water and health services.

However, it has been rejected several times, most recently in February, on the basis refugees could use coming to New Zealand as a back door into Australia.

Mr Turnbull said he thanked Ms Ardern but he did not want to do anything that might encourage a return of people smuggling into Australia.

He said his country was focused on a deal that would see 1250 refugees resettled in America.

He said Australia would consider other options only if that did not succeed.

“We are pursuing those arrangements [with the US] at the moment and that is our commitment,” Mr Turnbull said.

“We want to pursue those, conclude those arrangements and then in the wake of that, obviously we can consider other ones.”

But how likely is it that the deal with the United States will resolve matters?  This transcript of the famous Trump Turnbull telephone call from earlier on in his term suggests not very.  Trump was reported as saying this:

Here I am calling for a ban where I am not letting anybody in and we take 2,000 people. Really it looks like 2,000 people that Australia does not want and I do not blame you by the way, but the United States has become like a dumping ground. You know Malcom [sic], anybody that has a problem – you remember the Mariel boat lift, where Castro let everyone out of prison and Jimmy Carter accepted them with open arms. These were brutal people. Nobody said Castro was stupid, but now what are we talking about is 2,000 people that are actually imprisoned and that would actually come into the United States. I heard about this – I have to say I love Australia; I love the people of Australia. I have so many friends from Australia, but I said – geez that is a big ask, especially in light of the fact that we are so heavily in favor, not in favor, but we have no choice but to stop things. We have to stop. We have allowed so many people into our country that should not be here. We have our San Bernardino’s, we have had the World Trade Center come down because of people that should not have been in our country, and now we are supposed to take 2,000. It sends such a bad signal. You have no idea. It is such a bad thing.

Then there was this exchange.  Prepare to have your basic sense of humanity shaken:

Turnbull: Yes, but let me describe what it is. I think it is quite consistent. I think you can comply with it. It is absolutely consistent with your executive order so please just hear me out. The obligation is for the United States to look and examine and take up to and only if they so choose – 1,250 to 2,000. Every individual is subject to your vetting. You can decide to take them or to not take them after vetting. You can decide to take 1,000 or 100. It is entirely up to you. The obligation is to only go through the process. So that is the first thing. Secondly, the people — none of these people are from the conflict zone. They are basically economic refugees from Iran, Pakistan, and Afghanistan. That is the vast bulk of them. They have been under our supervision for over three years now and we know exactly everything about them.

Trump: Why haven’t you let them out? Why have you not let them into your society?

Turnbull: OK, I will explain why. It is not because they are bad people. It is because in order to stop people smugglers, we had to deprive them of the product. So we said if you try to come to Australia by boat, even if we think you are the best person in the world, even if you are a Noble [sic] Prize winning genius, we will not let you in. Because the problem with the people —

Trump: That is a good idea. We should do that too. You are worse than I am.

Get all that?  Turnbull said that the Manus Island residents did not present any threat to Australia, they were economic refugees.  And Trump formed the opinion that Turnbull was worse than him.

But if the offer is still there and America is doing the vetting then why cut off the food and water and power?  Ardern indicated that she was prepared to look at giving the refugees so that they could not travel to Australia under New Zealand’s open access agreement.  Turnbull’s response appears to be focus group motivated belligerence.

This is leadership. She makes Turnbull look small, weak and irrelevant #auspol https://t.co/PVjPxLAWAN

Rejecting the NZ offer re #Manus refugees is like saying 'we don't want them but u can't have them either'. It's the response of a 3 yr old

The year is 2017. Russell Crowe has become Australia's voice of reason and compassion. https://t.co/mnhsPrmkL0