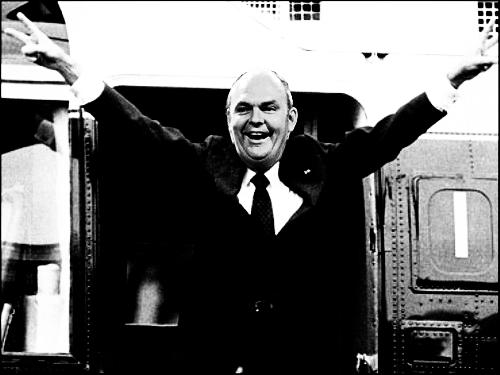 Between the there is no problem to the we will sell off lots of state houses to solve the problem of homeless to the we have set aside lots of money to buy new social housing beds which actually are existing beds my head is spinning.  The Government’s various responses to the homelessness crisis, which it created, just offers up free hits to left wing bloggers.

But this week John Key has looked up and everyone’s staring at him saying “WTF, mate? People are living in cars? We’re putting them up in motels so their kids can sleep in a bed for once and we’re charging them for the privilege? What the hell is going on and why aren’t you doing anything about it?”

The latest attempt at blame shifting avoidance is this attempt by Steven Joyce to suggest that Auckland’s housing crisis is similar to Christchurch’s.  Except one was due to a couple of catastrophic earthquakes and a multitude of after shocks and the other was not.

John Palenthorpe at Shinbone Star sums up the stupidity of this comment well.

Did a Government minister just equate a housing crisis in Auckland to the aftermath of an earthquake in Christchurch, which the city is still recovering five years on? Yes. He did.

Except Auckland hasn’t been struck by a natural disaster. It’s disingenuous and absurd to even try and draw a parallel. Which didn’t stop Joyce.

An earthquake is unforeseeable, sudden and beyond control. That’s not the Auckland Housing crisis. A better analogy might be some sort of slow tidal inundation.

Except that’s not good enough either. Because the crisis in Auckland is a combination of economics, policy, government and the market. It’s not a force of nature, it’s a manufactured situation.

Trying to play it off as though it’s a natural disaster is cowardly. It is smart though. An earthquake is a natural disaster, it’s nobody’s fault. People accept that earthquakes are things that happen. But the Auckland housing crisis isn’t something that just happened, suddenly, in a shift of geology.

It’s a human failure. A failure of national government and local government to adequately recognise the problems and pressures of a housing market that was not so much heating up as bursting into flames.

It’s a failure to look beyond the GDP figures and consider the long term consequences of property speculation as economic driver.

It’s a failure of nerve to act when needed, and it’s a failure of integrity to accept that because the problem has been dismissed and ignored for so long, the only solutions which can have a meaningful impact are some of the most radical.

No doubt National will continue to try and blame Labour for the current crisis.  Because they were building houses back in 2008 but should have built more.  Or there was housing inflation.  Or something.

To be fair to Joyce he is claiming that red tape is the cause of the problem.  From the Herald article:

Auckland’s housing problems are a regulatory issue, primarily, and [the result of] a long period of under investment in housing which was caused by a strangling of red tape.”

Prior to the amalgamation of the Super City, local regional authorities were suing each other to a standstill, he said, causing a backlog of regulatory issues.

“Remember when we came in and put the Super City together, one of the key things was that the eight local regional authorities had been suing each other for years over the interpretation of the metropolitan urban limit,” he said.

“So we’re dealing with a backlog of regulatory issues, and we are still perhaps getting pretty frustrated with the Council, more generally, that actually that they have not yet got the bull by the horns in terms of supplying enough land.”

But the claims that inter council litigation over the MUL from over six years ago stopped everything is again bizarre.  There were some cases over aspects of the MUL involving the ARC but the growth strategy was in place and the general direction had been settled.  Claiming that it is all the fault of red tape is on a par with claiming that Auckland’s housing crisis is the same as Christchurch’s.

The claims are getting more absurd as time goes on.  After eight long years this Government should have done something.  The problem is because of its ideological blindfolds it thinks solving the housing problem can be achieved by paying its landlord mates greater subsidies, selling the very houses that could be used to address the problem and making it harder not easier for the poorest amongst us to access basic social welfare support.  These solutions are as intellectually bankrupt as saying that Auckland’s housing crisis is like Christchurch’s.