Australia where the bloody hell are you on gay marriage? 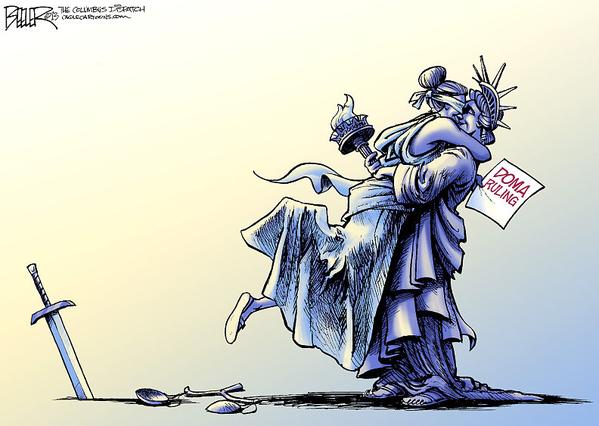 The United States Supreme Court has ruled that a state ban on gay marriage is a breach of the 14th amendment to the US Constitution.  This amendment says no state shall “deprive any person of life, liberty, or property, without due process of law.”  The majority held that dignity was an integral part of this provision and prohibitions on same sex marriage were in breach of the protection afforded.

No longer may this liberty be denied. No union is more profound than marriage, for it embodies the highest ideals of love, fidelity, devotion, sacrifice and family. In forming a marital union, two people become something greater than once they were.”

The conservative Justices did not like the decision.  Chief Justice Roberts said:

If you are among the many Americans — of whatever sexual orientation — who favor expanding same-sex marriage, by all means celebrate today’s decision. Celebrate the achievement of a desired goal. Celebrate the opportunity for a new expression of commitment to a partner. Celebrate the availability of new benefits. But do not celebrate the Constitution. It had nothing to do with it.”

It looks like the Supreme Court christmas party this year will be a difficult occasion judging by the hyper critical language used by the conservatives.  In as bitter a judgment as I have read Justice Scalila said this:

The opinion is couched in a style that is as pretentious as its content is egotistic. Of course the opinion’s showy profundities are often profoundly incoherent.”

But the decision is historic and clearly will be celebrated.

Which makes Australia’s stance even more of an outlier.  It is hard to imagine the home of Oxford Street should have leadership that is so homophobic.

Tony Abbott is clearly opposed to any change.  He thwarted the Labor leader Bill Shorten’s attempt to introduce an amending bill saying that a bill has to have bipartisan support.  Elements within the Liberal Party have announced they will oppose a conscience vote.

From the Sydney Morning Herald:

Conservative government MPs say same-sex marriage is not inevitable and have warned Tony Abbott that he faces a savage internal backlash over the issue, likening it to the devastating split over the ETS which cost Malcolm Turnbull the Liberal leadership in 2009.

Several right wing Parliamentarians have told Fairfax Media they believe they have the numbers to oppose a free vote, a move that if successful  would greatly decrease the chances of the bill passing the lower house.  “If you put this to a ballot in the party room, this does not get up,” confided one MP.

It makes you wonder what they are worried about.  If New Zealand, Ireland, the United States and many other nations can realise the importance of same sex couples formally celebrating their love then why can’t Australia.

55 comments on “Australia where the bloody hell are you on gay marriage? ”