New York Governor Cuomo was told CoVid-19 was like an approaching freight train. More like a bullet train was his response. Watching the White House daily briefing with Trump dominant it looks like a massive train wreck is on the way in the US.

With confirmed cases exploding, particularly out of New York, Trump’s oft-stated desire to have the US back to work by Easter so the “beautiful churches” can be filled is delusional. The figures are here, based on Johns Hopkins University data. 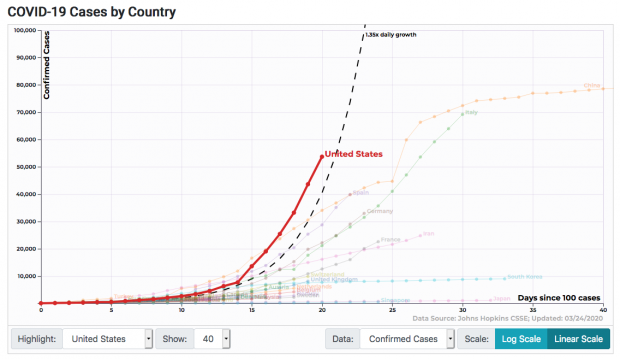 Medical and epidemiological advice is being side-lined in favour of trying to stem the economic fallout and save Trump’s re-election. Massive injections of money to the same corporations who profited from the 2008 crash will not make up for real economic activity. The World Health Organisation says the US is likely to become the next epicenter of the virus.

Governor Cuomo is honest and direct. Joe Biden is AWOL in more than one sense.

The contrast with our government’s swift and decisive action could not be greater. We may have to protect our borders for longer than we think.