Can he look himself in the mirror?

John Key on August 30 “The appointment of a minister to Cabinet has to be done on the basis that as Prime Minister I can look that person in the eye and have confidence that I can rely on their word.”

Also, I know it’s small change to Key but to those of us who aren’t multi-millionaires it seems quite strange to invest $200,000 in rail company and spend a lot of energy trying to find out information on that company’s prospects, then condemn rail as ’19th century technology’ and the company he put so much money in as ‘a train set’. I guess they were just catchy lines and a way to attack Labour. Pity his words couldn’t live up to his actions.

A final point that ought to be obvious. Just because Key lost money all up does not mean he wasn’t corrupt in his use of information he gained as an MP to improve his position. First, he made money when he bought shares in his own name, then met with Rail America, publicly talked up the shares, and sold them. Moreover, if Key had not asked parliamentary questions on Tranzrail (the answers to which are nominally public but, in reality, are only read by the MP asking the question), if he had not been present at select committee meetings, if he not met with Rail America, he may have held on to them longer and lost more money. Just because you’re a loser doesn’t mean your actions aren’t corrupt. 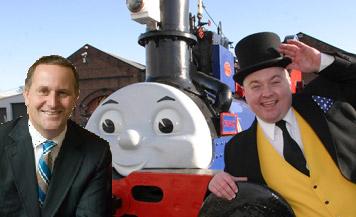 28 comments on “Can he look himself in the mirror?”