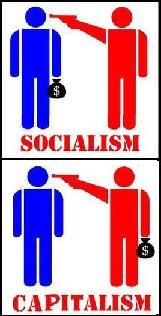 The capitalist doctrine sure has taken a beating lately. Not only have its raw excesses created a global crash which shows no signs of abating, not only has it been bailed out and propped up everywhere by nationalisation and trillion dollar taxpayer funded handouts, but now it seems that the people are starting to lose the faith. Even in the supposed bastion of the free market, America itself, the people just aren’t quite so sure any more:

Only 53% of American adults believe capitalism is better than socialism.

The latest Rasmussen Reports national telephone survey found that 20% disagree and say socialism is better. Twenty-seven percent (27%) are not sure which is better.

In an ever more worrying sign for capitalism “going forward” as they say:

Adults under 30 are essentially evenly divided: 37% prefer capitalism, 33% socialism, and 30% are undecided.

It’s not a very big sample size, (1,000 Adults conducted April 6-7), and you have to wonder what Americans understand by such vague terms as “capitalism” and “socialism”. But even so, I can’t imagine a survey result like this even one year ago.

36 comments on “Capitalism losing its allure ”