National’s charter schools are predicated on the idea that the public education system is doing a bad job. They’re (over-)funded to do things differently. So its more than a little odd that He Puna Marama Trust’s charter school is simply getting local state schools to do all their teaching for them. They just clip the ticket converting taxpayers money to private profit. Ridiculous corrupt NAct policy.

Isolating change: the poverty of education

John Key presented one great idea in isolation instead of a full election agenda: a desperate attempt to stop the growing discontents with his government.  He failed to address underlying problems.  Cunliffe will outline a broader political agenda.  Turei addresses poverty & income inequalities.

Hekia, in her own succinct words. Or at least Scott’s.

National’s carefully constructed Educational Policies, designed to give the impression of action but based on the transfer of riches to the children of the wealthy and the bashing of Teachers Unions, are in tatters following the release of the Pisa Report.  Cuts made to Teachers Professional Standards in 2009 made against advice are obviously having an effect.  And increasing child poverty must be having an effect, despite the Government’s refusal to even measure it.

What the Hekia happened to our education standards?

The latest OECD report on educational performance for 15 year olds shows a significant drop in New Zealand’s relative standing.  What the Hekia is going on?

Why is Treasury providing the government with advice on spinning and disguising widespread changes to Education? In this way, NZ’s democracy is undermined, and changes are continually made that benefit the few and make life more difficult for the many. Government MO or renegade Treasury?

For the second time in less than 12 months the High Court has ruled a decision of Hekia Parata’s to be invalid.  The latest decision to be invalidated was the decision to close Phillipstown School in Christchurch.  It is clear that either Parata needs better advisors or John Key needs a new Minister of Education.

Parata and the media 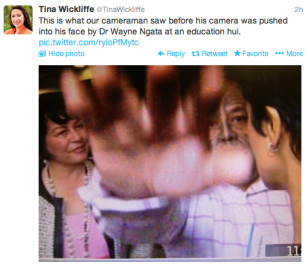 Hekia Parata seems to have noticed that we have a problem with trades education and apprenticeships in NZ. It’s a problem that is the making of National governments past and present, and they will need to completely rethink their blinkered approach to education in order to fix it.

Parata was told it was too early to make Christchurch school decisions by her ministry and why aren’t we allowed to know how much the state paid off Don Elder when he resigned over Solid Energy’s rapid decline?

I’m starting to feel sorry for Hekia Parata. In his column yesterday Armstrong referred to her as “something of a pariah figure” in the education portfolio.

Oh dear. Lockwood Smith was by common consent one of the best Speakers we’ve had. David Carter seems to be heading in a different direction. Lockwood required Ministers to give direct answers. Today in the House Carter gave the answer for Hekia Parata, interpreting her words to  get her off the hook. He may well have put himself on one though, if that is the way he is going to go.

Sorry seems to be the hardest word

Hekia Parata is in deep trouble. She has even resorted to grudgingly forcing the word “sorry” from her lips. But it isn’t even close to the apology that is needed…

Looks like Parata has been shafted by Key – her written promises to Christchurch schools will not be honoured. Instead it seems that Christchurch kids are being used as pawns in National’s electoral maneuverings.

Parata and the Christchurch schools

As widely reported, Chirstchurch schools find out their fate today. The damaged Hekia Parata was the wrong person to front this process…

Did we just hear Steven Joyce sh*t all over his colleagues?!?!

The biggest winner is Dr Nick Smith. He returns to Cabinet after his fall from grace last year, and is appointed as Minister for Creating a Perception of Crisis in Order to Justify Savage Cutbacks in Entitlements.
The biggest losers are Kate Wilkinson and Phil Heatley, who have been dropped from Cabinet altogether. Both have failed to perform, and their inability to communicate with the smoothness of someone like Hekia Parata will have counted against them.

So Nick Smith is to be returned to cabinet after spending nearly a year on the bench for his ethical flaws.  Presumably 10 months on the back benches heals all those desires to abuse your powers to try to help your friends get money.

Doubling down on Parata disaster

Protecting the incompetent Parata is a further sign that Key’s government is well in to sclerotic middle age.

Parata isn’t the most corrupt minister Key has but she’s definitely the most incompetent. Now, the Secretary of Education has been paid out to take the fall for Hekia’s incompetence and that of her sister, Apryll, Deputy Secretary Performance and Change. Parata has maintained her reputation for nepotism being an appalling people manager. But she won’t go, and Key won’t make her.

Can’t say that I blame Longstone for bailing, she was working for a Minister who is clearly well out of her depth.  Another fail for Hekia Parata,  she’s the one that should be going.

What I like about Hekia Parata is that’s she’s proof that image doesn’t always triumph over substance. The Nats thought that as a good-looking Maori woman she ticked all their PR boxes. But, she’s been a PR disaster because she’s arrogant and ignorant. She keeps on making bad, poorly worked-through calls. And the whole government gets dragged through the muck with her.

Too much stupid; too little time

I don’t really have time to write something, but there’s just too much stupid this morning to let it pass. Nathan Guy heads today’s list, but Craig Foss, Tariana Turia, Bill English and Hekia Parata also need mention.

ImperatorFish: A Statement From Hekia Parata

A statement from Education Minister Hekia Parata to concerned parents, teachers and children in the Christchurch area.

Which Parata to believe?

Hekia Parata September dressed up plans for school closured and mergers in high-sounding language and pushed them hard. Hekia Parata November says that some of those plans were crazy. Which Hekia Parata should we believe?

Parata must be giving thanks for Dotcom

If it weren’t for the fact that the Prime Minister is a) covering up for a corrupt, lying minister because he heads a support party and is, therefore, above accountability on Planet Key and b) being exposed as an inept and asleep at the wheel in his oversight of the nation’s spies, then Hekia Parata would be clinging on to her political career by her fingernails right now. Still, plenty of time for that.

Parata is trying to close schools based on data that is (as even the Ministry now admits) massively incorrect. The attack on the social fabric of Christchurch was already inexcusable. This latest fiasco makes it even worse.

Where are the resignations?

John Key refuses to accept any responsibility for what his spies get up to. The only point of democratic responsibility for our spies doesn’t monitor them and won’t take the blame for failing to do so. He won’t fire a corrupt, lying minister, either. The rot is spreading to the public service. There has been not one resignation, not a single one, due to the Dotcom debacle.

So the first ‘ropey’ National Standards data is slipping out. It may not bear comparison, and not be moderated or indeed standardised, but Hekia Parata can now divulge the great wisdom that National’s StandardsTM provides.