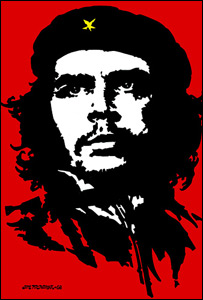 Today is the 40th anniversary of Che Guevara’s death.

The BBC has a piece up titled “Che: the icon and the ad” tracing the history of the famous Guevara image.

“There is no other image like it. What other image has been sustained in this way?” asks Trisha Ziff, the curator of a touring exhibition on the iconography of Che.

“Che Guevara has become a brand. And the brand’s logo is the image, which represents change. It has becomes the icon of the outside thinker, at whatever level – whether it is anti-war, pro-green or anti-globalisation,” she says.