As widely reported this morning:

Child poverty on the rise in New Zealand again – report

After taking into account housing costs, that figure is the highest it has been since 2005 and reverses the trend of the last few years.

2005 was the year that the last Labour government introduced Working For Families, and sent child poverty on a downward trend for a few years.

The statistics are also significantly worse compared to decades ago, with 29 per cent of children now in poverty, compared to just 15 per cent in 1984.
…
“No matter how you measure poverty, everything points to things being far tougher than they were 30 years ago. That’s not right in a country like ours and it’s not fair,” Children’s Commissioner Russell Wills said.

Thank you neoliberal reforms. From The Herald:

Nearly one in three New Zealand children ‘living in poverty’

His latest annual Child Poverty Monitor, out today, says children living in households earning below 60 per cent of the median household income after housing costs, have almost doubled from 15 per cent of all children in 1984 to 29 per cent last year. Children hospitalised with poverty-related illnesses more than doubled in the 1990s and have increased further in the recent recession.
…
Political scientist Dr Bryce Edwards said the message was “a beautiful contrast” with Prime Minister John Key’s claim in 2011 that “anyone on a benefit actually has a lifestyle choice”.
…
“It has a double meaning,” he said. “It’s not ‘choice’, meaning it’s not a good thing. It’s also not the children’s choice.” 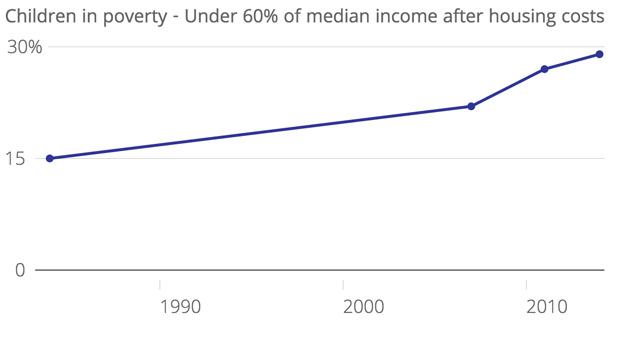