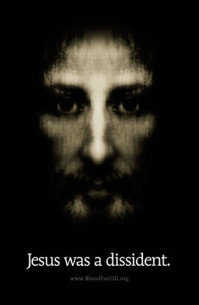 In the spirit of Christmas, the last post was a provocation about a version of Christianity that would fit quite happily with the kind we celebrate at this time, in this society.

Christmas is essentially about the Mystery of God becoming one of us. God does not become real in the Boxing Dale sales, or in Santa parade costumes, or in eating yourself until bloated. Universal love comes down from the level of abstractions like “God” and becomes concrete in the struggle for the liberation of the oppressed.

Two quick passages, the first about 3.5 thousand years old. In Moses’ mission of liberation, there was a close relationship between the religion of Yahweh (God) and the elimination of servitude:

There’s plenty more in there about the repudiation of slavery, starvation and poverty. It’s not hard to read Exodus inside a liberation theology.

Skip 1,500 years. What Jesus was on about was the task to liberate oneself from sin and the lies around us, and in doing so free the whole world. He named the perpetual impulse toward freedom as a personal conviction that would spread across the world:

This is what the kingdom of God is like. A man throws seed on the land. Night and day, while he sleeps, when he is awake, the seed is sprouting and growing; how, he does not know. Of its own accord the land produces first the shoot, then the ear, then the full grain in the ear. And when the crop is ready, he loses no time: he starts to reap because the harvest has come. (Mark ch. 4).

And so a movement towards freedom begins. (what they did to this movement …. sigh)

The point is use a moment in time  – like Christmas – to recommit to the task of perpetual liberation. That’s got more satisfaction then screwing up the tinsel from the 25th’s wrapping paper.

35 comments on “Christmas and Freedom ”