No doubt this blog will be full of comments today about David Clark.  It has been revealed that he breached curfew a couple of weeks ago by travelling 20 kilometers to a beach with his family.  His bike riding exercise I thought was marginal, this breach is not.

I can understand the pressure.  Clark has one of the toughest jobs in politics.  He also has a family.  Like all families they are under pressure.  He obviously thought at the time that the visit was worth while and family time important.  The rules were somewhat vague earlier on but cannot be stretched to allow the trip.

He has given a fulsome apology and by that I mean a full throated abject apology a catholic would be proud of.  Jacinda Ardern has demoted him, taken his associate Finance portfolio from him and indicated that if it was not for the crisis he would have been sacked.

And let’s stick to the curfew.  For instance weekly six hour trips between home and work are not on.  And Simon should use zoom from home.  It is good enough for the rest of us.  I hear that Tauranga’s internet is actually quite good.

And I am interested if this example from the New Lynn National candidate, who lives on the North Shore, is being repeated by other National Party candidates? 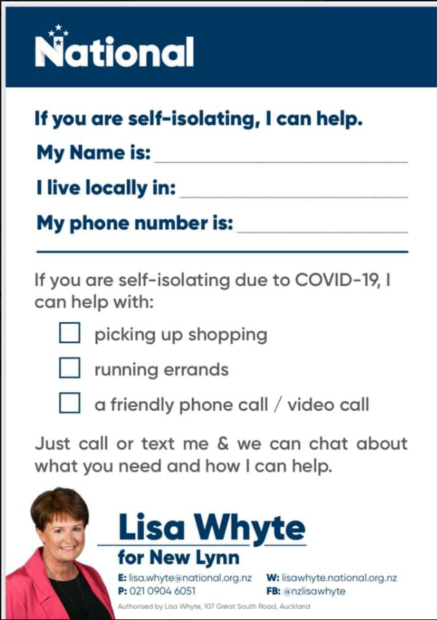 Nice gesture but the advice from the National Party is very clear.