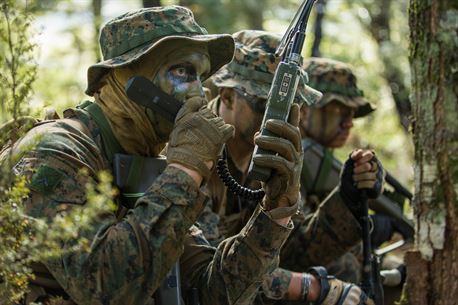 It’s always bugged me that our military forces are under-used in New Zealand. It’s time we invited them to protect us from climate change.

They are the only public sector entity in this country with the capacity to do much about it.

They are extremely horizontally integrated, with one Commander Joint Forces, one Defence Shared Services across all of them, and a really clear overall structure.

We’ve often wondered what it would be like to react as a nation to climate change as we did to the threat of World War Two in the Pacific. The Pacific itself is now the threat.

So, James Shaw, here’s your chance. Hire them.

But you can’t just stick Lieutenant James Keating on the Climate Commission. Oh no. To get your mitts on all that beautiful, equipped, motivated, loyal, logistically streamlined, highly trained and focussed set of organisations, you would need to do some work.

Our defence establishment can play an important role in providing hard-headed calculation of risks to New Zealand, including about climate, to public debate.

The last Defence White Paper would probably need to be revisited.

Our armed forces are also the one institution that retains the confidence and respect of the great majority of New Zealanders, and political parties.

That proposal will of course be hard for the Greens, who want to constrain our service men and women to “peacekeeping, search and rescue, disaster relief, and fisheries protection”, without any frigates.

To make it a little easier, what James could do is expand on the Green purpose of the NZDF of “the provision of peace, justice, and the environment.”

All too many in the hard left have an aversion to recognising the legitimacy represented within the defence establishment of national security issues, national interests, and nationalism as mobilising forces. But this government’s climate policy was not written for citizens of the world. It was written for New Zealand as a nation-state with the legitimacy to implement national policy with national citizens. You may think globally, but you act locally.

Bringing NZDF as a key agent within climate change, both in policy expressing climate change as a risk to national security, and in programme work to mitigate against it, has some other advantages:

It would give Ron Mark something to do other than pissing all the generals off.

It would be a National show-stopper: the right can’t ever criticise the armed forces about anything.

It would also lighten the load of the agency currently most at the front line of climate change: NZTA. Minister Twyford will shortly have them fully in harness lowering transport emissions from road to rail.

The political and policy link Shaw needs to make, however, is not with transport. The real breadcrumb trail is from climate change, to nation-state instability, to immigration. That doesn’t just wake up our commanders of border security. It wakes up Australia.

The NZDF, our greatest and most respected public entity, deserve a real and fresh role in New Zealand. They are a proud institution and this government can help them stay proud. By comparing climate change to the threat of nuclear war, our Prime Minister has already signalled it as a national security issue.

With that national security threat clear from the top, it’s time for the armed forces to step in.

74 comments on “Climate Change and the New Zealand Defence Forces ”