Comparatively, gingers have it easy 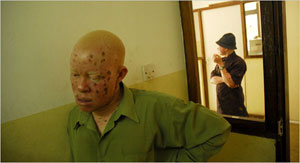 Last month Mike Hucknall, lead singer of Simply Red, asserted that ‘ginger jibes’ were a form of racism. Opinion was divided. As you ponder that one, spare a thought for Tanzanian albinos.

The New York Times reports that in the past year at least 19 albinos there have been killed and mutilated – victims of what Tanzanian officials say is a growing criminal trade in albino body parts.

…[W]itch doctors are now marketing albino skin, bones and hair as ingredients in potions that are promised to make people rich.

As the threats have increased, the Tanzanian government has mobilized to protect its albino population, an already beleaguered group whose members are often shunned as outcasts and die of skin cancer before they reach 30.

2 comments on “Comparatively, gingers have it easy ”