Police issued a statement last night reassuring Wellingtonians about the safety of movement in the area around Parliament, and asking the protestors to cooperate with moving vehicles.

Wellington Police will have a highly visible presence in and around the Parliament grounds tomorrow to provide reassurance for those going to work and school in the city.

We will have foot patrols in around the area of the railway station, up Molesworth Street, and streets adjoining the protest activity. We encourage commuters to the area, to plan for continued traffic disruption, but we want everyone coming into the city to feel safe.

Police will also continue to monitor the protesters.

In the meantime, our planning for a way forward is advanced and we are urging leaders of various protest groups to work with us to clear the roads, and allow the public freedom of movement for traffic and surrounding businesses while retaining their ability to protest lawfully.

There are a number of complexities in dealing with protesters with a variety of causes and leaders, but we will persist in finding open lines of communication with group leaders as we urge them to engage to work with us.

We are offering to facilitate an alternative location for the vehicles and campervans, currently blocking streets around Parliament to be based, while they continue a lawful demonstration at Parliament.

We are also concerned about the number of children still present at the site, as health conditions particularly around sanitation, and risk of Covid, are now growing concerns.

There have been no further arrests.

Wellington district commander Superintendent Corrie Parnell says there were about 3000 protesters present over the weekend.

There has been a constant precense of 400 to 500 protesters in tents on the grounds and in the surrounding streets.

The police don’t plan to wait the protesters out, Parnell said.

“The primary focus now is to appeal to those key organizers, leaders of the various factions there to engage with us.

Police have tried to engage with organisers, he said.

Covid-19 spreading through the crowd is a major concern for the police, Parnell said.

Sanitsation issues at the site is also a concern for police, Parnell said.

When asked if officials were too slow in responding to the convoy and allowing the protesters to erect tents at the site, Parnell said “hindsight is a wonderful thing.”

“We were fully aware of a convoy. I don’t think we’ve ever predicted the scalability and actually what’s played out here.”

The police were not involved in the decision to turn Parliament’s sprinklers on and to use loud music to try and get rid of protesters, Parnell said.

“It’s not a tactic we would encourage. It is what it is, it happened.”

He encouraged commuters to plan for continued traffic disruption, however, he said Police wanted everyone coming into the city to feel safe.

RNZ’s Mediawatch on the media coverage of the protests,

Covid skeptics occupied Parliament grounds this week under the banner of ‘freedom’ – and many other things. Did media coverage amplify their fringe views? Should media do more to understand them and what motivates their movement – in spite of their obvious hostility to the media themselves? Mediawatch asks an editor wrestling with those dilemmas.

Previous posts on The Standard:

The right to protest

Parliament protests and the road to splintered societies 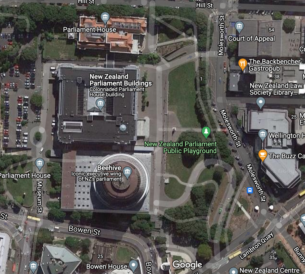