In its 1992 review of the year, the Herald made David Shearer and his wife Anuschka Meyer “New Zealanders of the Year”. The previous week the Herald had also reported that David Shearer was awarded an MBE by the British government.

Just a few quotes to get the flavour:

New Zealand relief aid workers David Shearer and Anuschka Meyer call them “incidents”. They are in fact terrifying stories of being at the mercy of armed Somali bandits, of trying to reason with angry young men who will kill for food, diesel, a vehicle or just for the hell of it…

Shearer talks of the day a Somali man talked his way into the compound, concealing a loaded pistol. He pointed the gun at Shearer and made demands before being persuaded to leave…

Shearer talks about those moments in the detached matter-of-fact manner of someone who has left it all behind and is now trying to decide whether to paint his Kingsland house calypso gold or hint of yellow”.

I wonder what colour Russel Norman would go if faced with similar circumstances. He probably thinks he’s under fire during Question Time in Parliament.

Click the thumbnails below to read the full articles. 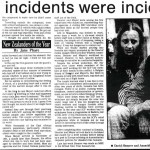 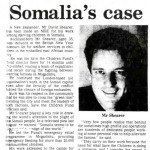 47 comments on “Courage under fire ”