Russel Norman: Climate change is harder to visualise than coronavirus, but no less dangerous

Executive Director of Greenpeace NZ, Russel Norman writes about the different responses to climate change and covid-19, and the things we can learn from the pandemic.

How ironic that Parliament is to debate climate change today, as the latest in a torrent of warming-fueled extreme weather events bears down on the country, and as the government charges Russel Norman and the other heroes trying to end oil exploration in NZ waters.

Norman on the economy

Russel Norman was right in 2014 when he said that the Nats were daft to gamble on oil and bulk milk production, and he’s right again now to draw attention to the failures. We need a green economy! 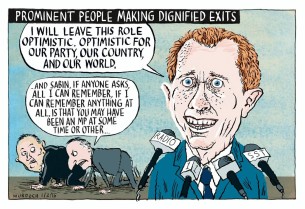 Green Party announcement – Russel Norman to stand down as leader

Twitter has gone berserk about an announced Green Party press conference for 11 am today. Initial speculation is that a Green MP may be standing down. Update: One News has tweeted Russell Norman has resigned as leader. Update: Russel’s Norman’s statement added.

For perhaps the first time since John Key took power, someone has had the guts to stand up and blame him directly for the corrupt government he’s been running.

Russel Norman asked Bill English about the economic impacts of coming oil shocks and how transport infrastructure planning takes them into account. I’m not sure which was more surprising: English’s matter-of-fact acknowledgment that peak oil is coming, or his attitude that the government doesn’t need to act because the market will sort things out.

The Labour and Green parties’ activists are in uproar over their parliamentary wings’ decision to vote for the Gerry Brownlee Enabling Act. A lot of people are saying they won’t campaign for these parties and talking of voting for a minor party or independents. Is it time to damn them and leave them? No. We’re going to win our parties back.

The most disturbing aspect of the handling of the Chinese security guard’s assault on Russel Norman is the way that the Nats are going to use it as an excuse to further restrict free speech. Don’t let them set us on the path to America’s notorious “free speech zones”.

Do we now kowtow?

The police won’t lay charges against the security guard who assaulted Russel Norman. Fair enough I guess. They’re out of here today. Probably too minor to justify a prosecution. That doesn’t make what happened OK. A thug for a foreign power violated the rights of one of our MPs on the grounds of our Parliament. A display of contempt for our sovereignty. And our democracy.

A security guard for Chinese Vice-President Xi Jinping attacked Green MP Russel Norman today while Norman was protesting at the Chinese delegation’s arrival, and holding a Tibetan flag. Our Government needs to make a formal protest to China over this incident.

It’s the lies that get you. That’s what Agriculture Minister David Carter and John Key are learning as more details of Carter’s conflict of interest over the legislation that removed the Environment Canterbury councilare emerging. Carter and Key now have to explain why they have lied and misled, which will be tricky to explain if they continue to insist there’s no ministerial misbehaviour to cover up.

Good on Chris Carter. He’s the only politician on Left taking some leadership in opposing the National Government’s abandonment of New Zealand’s anti-whaling stance. Today he launched an online petition against the government’s position. Carter writes: “John Key’s great plan to save the whales is apparently allowing the Japanese to hunt them commercially. This appalling […]

I never seen a government crash so quickly, so hard. The Standard was saying before the election that Key was a two-faced facade and his government would push a rightwing agenda. The media chose to ignore the signs. Too caught up in the fun of getting their boy elected to care about what would happen […]

Some stuff to read

A few good posts today that are worth a look if you missed them: Chris Trotter reckons the police and the media are grossly underestimating the turnout at today’s hikoi. If we assume lower Queen Street to be roughly a kilometre in length and about 30 metres wide we get an area of 30,000 square […]

The challenges for the Mt Albert candidates

Bit of a group effort this one. John Boscawen MP – Boscawen is mad as a hatter and pretty damn ignorant. So he should appeal to the hard-right voters. In Parliament, he has argued against the Waterview tunnel and for a surface motorway. That’s not going to fly with the people of Mt Albert, especially […]

Last week Russel Norman, Wellington resident and Green candidate for Mt Albert, publicly labelled Aucklander David Shearer, Labour’s candidate, as “a grey machine man “. In its 1992 review of the year, the Herald made David Shearer and his wife Anuschka Meyer “New Zealanders of the Year”. The previous week the Herald had also reported […]

It was deeply depressing to wake up this morning to the sound of Russel Norman running National Party attack lines on Radio NZ. For a party that has the best policy by far on how to deal with the huge economic and environmental challenges we face, it’s disappointing to see the Greens voluntarily descend into […]

Gordon Campbell on the MoU

Gordon Campbell’s latest Scoop column takes a very critical view of the Greens’ Memorandum of Understanding with National. While the Greens’ strategy is based on the need to cooperate with what they see as a likely two-term National Government, Campbell argues their cooperation may help turn that likelihood into a certainty. Despite the genuine merits […]

The Drinking Liberally – Wellington email: By popular demand this Wednesday Drinking Liberally Wellington presents: Russel Norman – Co-leader of the Green Party. Russel is a relatively recent addition to parliament and many of you expressed an interest in hearing more about him and his views. This is your chance! Come share a drink with […]

Good on Mike Ward for finally seeing sense and stepping aside, allowing Greens co-leader Russel Norman to enter Parliament replacing Nandor Tanczos. Norman is rapidly establsihing himself as a very good media frontperson for the Greens; being in Parliament will enhance his role. Only the righties were praising Ward for not stepping aside (just as […]

Nandor to stay in Parliament until election

Nandor Tanczos has just announced he will not be standing down from Parliament early to let Russel Norman in because former MP Mike Ward has refused to step aside. According to Nandor’s statement: “I had hoped that I might step down soon and allow Co-Leader Russel Norman to take my place before the election, however, […]

As The Standard has grown, we’ve started to receive inquires from the media and requests for a comment or interview. We’ve been a bit hesitant about what to do in this regard. On the one hand, like most bloggers, we blog under pseudonyms and we believe what’s important is the writing and the arguments, not […]