Some right wing neoliberal dude on Nine to Noon promoting this idea that we’ve been through a big upheaveal before, the 1980s/90s, and this can be a guide to how to manage a covid economy.

Let’s not forget that Rogernomics was intentional and caused a huge amount of harm for ideological reasons.

It’s not a good model to lean on. Seems to me that Rogernomics is more like what we would have had this year if back in February we had a government that decided to make the economy more important than people eg if we had gone for a herd immunity response to covid.

Whatever the economic rationales for Rogernomics, it was still a neoliberal and then a right wing neoliberal response rather than a compassionate, left wing, or progressive one.

It didn’t have to be that way.

This applies to Labour too of course, and we’re still waiting to see how much Labour will be willing to step out of the cul de sac it’s been in for the past 35 years. Having a (voting) public au fait with the other options ups our chances of useful change.

Looking for other ways to think about this? The new paradigms that integrate social justice and ecology seem promising. Putting people and the environment at the centre and designing our responses out from that. The economy gets to serve the people and the land we live with rather than using us as resources.

Greenpeace NZ and the NZ Green Party are both putting out good material that presents this new, emerging framework in terms that are close enough to Labour so as to not scare the horses too much

Kate Raworth’s Doughnut Economics model is also a frame that can serve as a transition from neoliberalism and is based on values that work well in New Zealand. 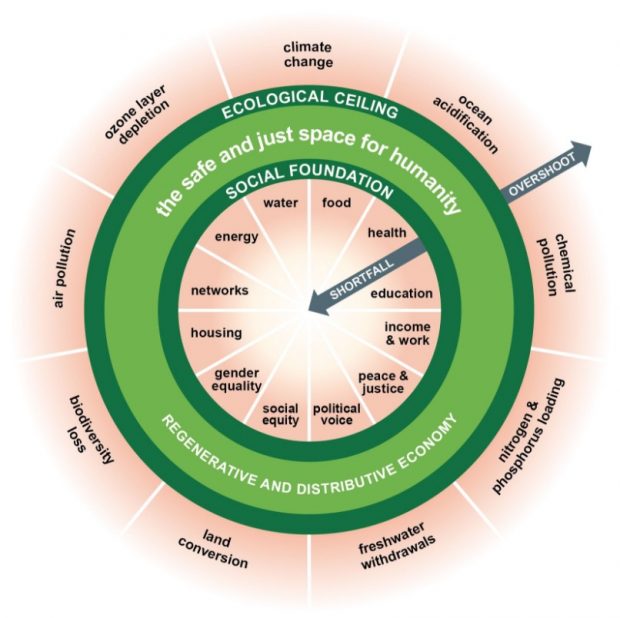 This is about using a new way of looking at problems, so that we can see  solutions appropriate to both the covid problem and the wider contexts of climate change, ecology crises, and poverty/social decay. It helps us avoid being channeled into limited solutions by using old frameworks that may not be suitable for the task at hand. We don’t have to through the baby out with the bathwater here (god knows we don’t need another too fast, top down revolution), but we do need people in power, and in the public, to be fluent in a range of languages.

One of the things I like about the graphic is that work and income are placed in equal proportion to many other human needs. This opens a door to those needs being met in multiple ways, not just via conventional models that say you have to work x hours a week to be able to afford y goods.

There is an introduction to Doughnut Economics on Kate Raworth’s website here.

Also on Nine to Noon, the idea that the dole brings the risk of welfare dependency but we could have a UBI instead. Not quite sure how that works, as if welfare has magic powers that make people need their dole more than other people need their wages. But the left should be paying attention to when the right are interested in a UBI, because one of the big problems with a UBI is how to tory-proof it. Especially if it is done alongside dismantling welfare, long a right wing goal.