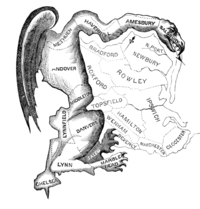 It appears that John Key and Rodney Hide are participating in an old political action in Auckland – the gerrymander. From a general desire from politically aware Aucklanders to get a more coherent local government for the city, they have constructed a political system for business to completely dominate the city. Democratic and public spirited efforts will be stifled by directing it into ineffectual local boards.

The proposal trumpeted by John and Rodney has all of the hallmarks of a system designed to be a make a virtue of  venality. The question is if this is what is intended?

Forget the local boards. They will have probably less effective power than the current community boards. I’d agree No Right Turn with his eloquent dismissal of “..simply a DHB-style blame sink..”. In other words, they will primarily be there for people to complain to and about for things that they have no real control over.

Funding decisions about where money goes and what it is spent on will be made at the super-city council. The left should simply ignore these local boards as being ineffectual sops to the idea of local engagement. Effort and resources should be concentrated on the council.

The super city council is made up of 12 councilors elected from wards and 8 elected “at large”.

This means that the wards will probably be in the order of 110,000 to 120,000 voters each – far more than double the size of the current national electorates. In Auckland electorate seats are about 50,000 potential voters, usually about 45,000 registered to vote, and usually about 35,000 actually vote (numbers vary between different areas of the city). The electorate seats are formed roughly around coherent communities, and can easily be argued as being too large for the task.

The most compact wards would probably be on the Auckland isthmus. Obviously the wards haven’t been defined yet, but one of these wards by population could largely cover the current Auckland Central, Mount Albert and Mount Roskill electorates. In other words, from the Gulf islands to Avondale and Hillsborough. No ward would have any significant commonality of issues.

It is difficult to see how a single councilor could successfully represent the citizens of such areas. For that matter it is difficult to see how a person could campaign in such an area without having a need for a *lot* of money for their campaign. If you look at the population of cities in NZ, Rodney Hide is expecting each ward councilor to represent a population the size of Dunedin or Tauranga.

The case gets even worse with the at-large councilors. They have to campaign in an electorate of 1.4 million people. The only effective way will be to use mass-media with even higher campaign costs, and presumably without the support and caps of the country-wide campaigns.

It is noticeable that the government’s proposal completely ignores caps on candidate spending and questions on transparency of donations.

However the Royal Commission noted that section 111 of the Local Electoral Act 2001 applied.  This would limit ward councilors to $55,000, and “at large” councilors and the mayor to $70,000.

These limits only relate to advertising and direct promotion during the 3 month election period. For instance they would not cover setting up a phone bank or the volunteers that staff it. Even these limits are ridiculously low. Sending a letter to all constituents would probably blow the limits. However to raise them would make the amounts of money that would have to be raised for campaigns absolutely ridiculous. Either way we get into the old troubled issue of transparency of influence.

Donations aggregating to a person over $1000 must be reported. But donations may be anonymous. Furthermore (and I could be wrong here), my reading of the act seems to say that only donations received in the three months before an election need to be reported. This suggests that it would be convenient to subvert the donation system by either donating prior to the election and/or anonymously to avoid any transparency. You can just imagine the palms being greased to change policy, and absolutely no information about how the decision making process has been affected.

The governments proposals show all of the signs of a classic gerrymander. They will not deliver any effective form of democratic engagement where taxes are raised or disbursed. The decision making will be concentrated in a group of councilors whose defining characteristic is likely to be how much money they can bring to their election campaigns. They will have to raise most of this money every 4 years, which will likely leave them beholden to anonymous large contributors. Presumably businesses looking for their own advantage.

The rate of voter participation in local bodies in Auckland is already about half of that of a general election (and falling). This proposed system looks likely to build a self-perpetuating political ‘elite’ based on a foundation of ‘anonymous’ donations and making decisions for their donors. I’d expect voter participation to keep falling even more rapidly.

Welcome to the ‘democratic’ world the way that NACT wishes it would operate. The world of large anonymous donations running my city – it is venal.

Update: It was pointed out that Matt McCarten had said much the same and more a few weeks ago in “Is there a privatisation strategy to go with super-city plans?“