Crime fell 1% in the last year from 1025 recorded crimes per 10,000 people to 1014. This is part of a pattern that has continued since National was booted from power and living conditions for the poor started to improve. The only big increase after 2000 you see in this graph (05-06) is a result of a change in reporting practice, not the actual level of crime. 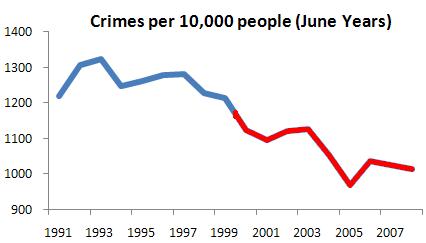 Now, I know our right-wing viewers will be up in arms about this. They will point to the fact that recorded domestic violence offences are up as proof that we’re going to hell in a hand basket. But remember, the measure is not ‘crimes’ but ‘recorded crimes’ – crimes have to be discovered (not all crimes are), reported, and recorded to get in the stats. So, reporting levels matter a lot. The evidence the Police have is that it is higher reporting, due to campaigns like ‘it’s not OK’, and better Police practice is behind the increase in the number of reported domestic violent crime. As I have noted previously, homicides are violent crimes that end in death and have a near 100% reporting rate – homicides are down, it would be strange to assume there is more violence but less of it is resulting in death. So, the sensible conclusion is that violent crime is not necessarily occurring more, it is being reported more.

The other point is that it makes sense that crime would be falling. When unemployment is low, people who might otherwise commit crimes have a constructive way to occupy their time and make a living. High unemployment leads to poverty and alienation – a recipe for crime.

[incidentally, as one might expect, all the publicity around tagging seems to be flowing through into higher reporting. Related offences – theft and burglary – continue to fall, and have halved since 1997]

[for Akdnut – murders in Auckland. Note, the number is small 5-21 a year (average 12), so there’s a lot of random variation] 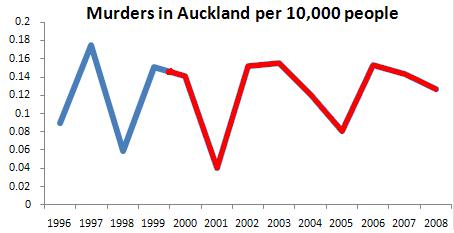