08wire produces some of the most well-thought out and best argued pieces on the blogosphere, as well as great videos. Well, I know what to do when I see gold  – thief it.

From 08wires’ post, here’s a table of arguments that comprise National’s ‘New Zealand sucks’ campaign and how they stack up against the facts: 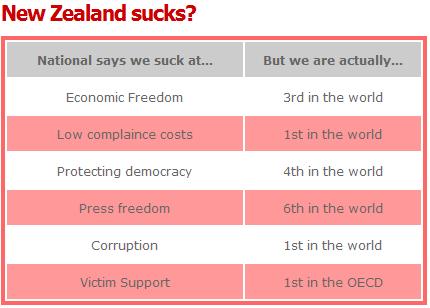 I would add that, contrary to National’s ‘NZ sucks’ campaign, we have one of the world’s cheapest electricity, incomes for all are growing rapidly after falling for most during the 1990s, and our growth rate in the last 9 years had been faster than Australia, the US, the UK, and Japan. Turns out we’re a great wee country.

Now, National knows that its claims are untrue. The Tories lie to you because they hope people will vote against the Government if they can create dissatisfaction with the state of the country, albeit based on falsehoods.

It would be really cool if these kind of basic, easily found facts were provided by media when they report the latest attack in National’s ‘New Zealand sucks’ campaign. Kiwis deserve to have context when assessing the validity of politicians claims.

[Update: AK reminds me that, again contrary to what National would have you think, our healthcare system is better than Canada and the US’s, and as good as Australia’s]