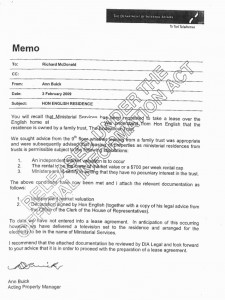 It’s not just Bill English that’s twisting in the wind over the rearrangement of his affairs to provide a pecuniary benefit to his family.

Here is a copy (PDF link) of the Parliamentary Services email tabled in the House by Pete Hodgson this week.

References to the “ninth floor” in the Labour government either meant H1 or H2 – nobody else. We must assume in this case that the request was approved by either John Key or his chief of staff. John Key is the Minister responsible for Ministerial Services so it is most likely he who has approved the advice.

Here’s where Bill gets slippery in question time last week – he tries the old “no Ministerial responsibility” trick until the Speaker gives him a hint that that won’t work:

Hon BILL ENGLISH: As the Minister of Finance has said many times, he accepts that there was a perception problem with the arrangements. He kept to all the rules, but he paid the money back. What else can he do?

Hon Trevor Mallard: I raise a point of order, Mr Speaker. The question was very precise. It had no extra material in it. It asked which of two tests should be used. That question was not addressed.

Mr SPEAKER: I would ask the Hon Bill English whether he could focus on the test that is applied, because the question was specifically about that.

Hon BILL ENGLISH: I raise a point of order, Mr Speaker. The Prime Minister has no ministerial responsibility for that in his capacity as Prime Minister.

Mr SPEAKER: The dilemma I face isâ€”I take it that the honourable Minister is still arguing that there is no ministerial responsibility for that issue.

Hon BILL ENGLISH: I can answer the question.

Mr SPEAKER: The Minister is happy to answer the question? I thank the Minister.

Hon BILL ENGLISH: The member is asking for a legal opinion. The Prime Minister has been advised that the Minister of Finance took legal adviceâ€”legal advice that was available to every member of Parliament about the declaration of pecuniary interests.

Last week Bill English said he took legal advice. This week Gerry Brownlee was designated to answer the question and the story had changed:

Hon PETE HODGSON (Labourâ€”Dunedin North) to the Minister responsible for Ministerial Services: Who provided any legal advice to support his view that the Hon Bill English is ‘fully compliant with the rules that operate’?

Then Gerry got in deeper:

Hon GERRY BROWNLEE: The member gets very excited about his own question when he should simply refer to the fact that the executive travel, accommodation, attendance, and communications services declaration 2003, brought down by the Rt Hon Helen Clark, was the provision in place at the time he is concerned about. It simply required that a pecuniary interest was denied. That was done.

Hon Pete Hodgson: How can the Minister substantiate that answer in light of an email dated 3 February between an official of Ministerial Services and the chief executive of Ministerial Services, which says: ‘I attach the relevant information, a declaration signed by the Hon Bill English together with a copy of his legal advice from the Office of the Clerk of the House.’, and the memo then concludes ‘Therefore, conditions have been met.’; how is it that the advice of the Office of the Clerk of the House was not part of the Government’s decision?

Hon GERRY BROWNLEE: Earlier in the week I gave the House an explanation about the status of the email that Mr Hodgson refers to.

Hon Pete Hodgson: If the status of the email is that it says something other than what it meant to say, what did it mean to say?

Hon Pete Hodgson: Who, then, did sight the Endeavour Trust deed to confirm that the pecuniary interest that was publicised in 2008 on the register is now declared to be no longer the case; who did sight the trust deed to ensure that the truth was being told here?

This is an “Alice in Wonderland” government – the words mean what Gerry, Bill and John say they mean.

Extraordinary! For very good advice from the media as to what should be declared, read Vernon Small here.

4 comments on “Curiouser and curiouser ”