This morning I was reading the Transport Blog on The Draft 2015-2025 Government Policy Statement released by the Ministry of Transport. This is the main starting point for a number of the transport planning documents over the coming decade(s).

Ignoring the questions about the climate change issues and use of public transport as a topics for another day, just looking at the assumptions that underly the MOT’s planning model about passenger transport makes me think that the planners there are completely delusional. Or just so far in bed with the road construction industry that they prefer to ignore economic realities.

The sections on Existing Demand and Travel Forecasts are perhaps some of the most interesting and are something that didn’t exist in the previous GPS. However they seem to be an attempt by the MoT to continue trying to justify spending the XX% of the transport budget on massive new motorways. They do seem to be finally acknowledging that traffic volumes haven’t grown but then push the argument that everything is just a blip and will recover again soon.

30. GPS 2015 (draft) has been prepared following a period of modest increases in freight demand and flat demand in light vehicle travel, measured in vehicle kilometres travelled (VKT). This is illustrated in Figure 2.

31. Demand grew strongly through the early 2000s, easing back through the middle of the decade. Following the global financial crisis in 2008, demand returned to close to 2005/6 levels and remained at these levels through to the end of 2013. A similar period of flat demand occurred in the aftermath of the fuel crisis in the early 1970s. In that case, demand remained soft for more than 10 years.

The problem with this is that overall the economy has already recovered and improved yet we are still to see any upward change in VKT or fuel consumption. The difference in the graph above where fuel consumption started increasing again is likely tied to fuel prices getting cheaper and there’s no sign that’s about to happen again anytime soon. In fact there’s not even a single mention in the document of what might happen to fuel prices in the future which in my opinion is a massive omission. Fuel prices can clearly have a massive impact on driving demand and without increased demand the already shonky economic cases for the massive roading spend up will be even worse.

This is “planning”? It looks far more like a wishful thinker with delusions of being back in the 1960s. Why?

If you look at the barrel price of our main reference crude over the last 30 years, as can been seen in this chart from interest.co.nz

The cost of crude oil we buy on international markets has fluctuated markedly over the past 30 years, even more so in NZ$, but the inflation-adjusted cost (“real” cost) shows we have benefited from a long period of relatively low costs.

Back in the 1970’s a increase in the real local landed price for crude caused a series of economic shocks to our economy. The increase in petrol prices, the use of CNG and LPG from the new gas fields,  the reduction of the maximum road speeds, and the imposition of carless days all contributed to the flattening of the consumption of petrol that lasted until the price of imported oil crashed.

The rise of fuel prices from 1999 as the world economy boomed had a strong impact on the cost of fuel in the budgets of families as shown by in the index of petrol prices and the consumer price index.

Obviously this chart is a little out of date as cuts off as the global financial crisis impacted starting in 2007. However the slowly increasing real cost of fuel since then has continued to rise slowly and remains a significiant part of the consumer price index .

But the trend is clear, when the fuel component cost of the CPI rises up high enough, then the numbers of passenger kilometres and the amount of fuel consumption stalls. This is exactly what we have seen from 2006 onwards.

So why does the MOT think that real fuel prices are likely to remain static or decrease as they did in the mid-1980s.

Who knows? That is what seems delusional to me because there is nothing that indicates an increase of cheaper oil, or a reduction in demand worldwide, or even a viable lower cost alternative. Everything appears to indicate that the operating cost of transport is likely to increase for both families and businesses.

The proven reserves of oil have increased over time at a steadily reducing rate (and there is a lot of contention about some of these statistics).

But increasingly these reserves are in harder to extract (and therefore more expensive) heavy oils and tar sands.

But there is also more demand from different consuming nations as developing countries start using more in developing and maintaining their economies. For instance look at the rise of China as a consumer. 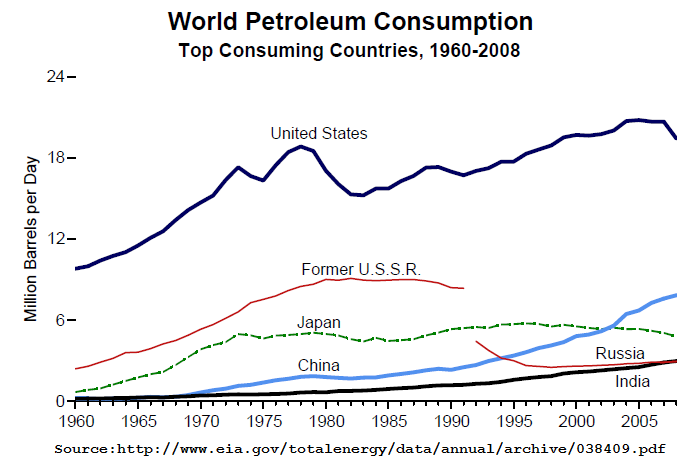 All of this indicates that the rising prices of extraction and the increased competition for oil is going to lead to a long period of increasing petrol prices.

Sure, we may find an economic way of producing transport without petrol for instance with electric vehicles. For instance with the Telsa “gigafactory“. However the resulting overall cost of such vehicles is likely to be at prices points that are well above the cost of the current vehicles based on current cheaply extracted and refined fuels.

So what is the government planning on spending transport money on over the coming decade? Transport blog summarises the high level mid-point spending and it is a lot more roads.

Somehow based on what looks like a delusional belief that people are going to start driving more as the price of petrol is going up, the MOT is planning about $17 billion dollars to be  sunk into (what I think will be) white elephant new roading over the coming decade.

They are completely delusional and appear to be living in the 1960s.

In fact I suspect that they should be regarded as being a arm of the roading construction industry.