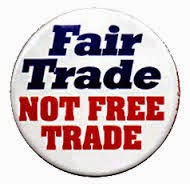 Reposted from bsprout at Local Bodies.

I have attempted numerous time to comment on Ele Ludemann’s Home Paddock blog in response to her post on Free Trade Agreements and promoting the false perception that they are vital to our economy. While I can’t imagine that Ele would be deliberately blocking my comments, none of them have been allowed to appear. Here is what I was attempting to say:

Most FTAs favour the larger nations and Australia’s FTA with the US has been a disaster for employment and the environment and the balance of trade favors the US by $13 billion. The growth of imports from the US continues to grow far faster than their exports to them.

Our CER deal with Australia has not actually served us that well when Australian supermarkets can block our products and New Zealanders working and paying taxes in Aussie can’t access the services that they help fund.

I recently attended a presentation from the Deputy Governor of the Reserve Bank and when he was asked about the importance of the FTA with China he actually couldn’t put a value on it. Apparently there was no evidence to show that the increased demand for our primary commodities wouldn’t have occurred without it.

As for the TPPA, all evidence from leaked documents so far show that corporate lobbying and influence provide real threats to Pharmac, patent rights for our IT industry and the potential for our Government to be sued for loss of profits.

Our open borders may make us the 3rd easiest country to do business in but that doesn’t mean that is an economic advantage, it actually exposes us to exploitation and is one of the reasons why our Current Account deficit is one of the largest in the OECD. The real fear should not about the loss of FTA’s but the real consequences of having them in the first place.

The IMF has indicated that our economy is actually quite fragile and it is interesting that an ex IMF official compares our economy with Ireland’s and suggests we are at the point of collapse.

Key is obviously aware of this and Pattrick Smellie suggests that the early election date was really to get it done before the economy dips again and the fragility of the recovery is properly revealed.

49 comments on “Local Bodies: The Myth of Free Trade Agreements ”