There was a great turnout at the Mount Albert War Memorial building this morning, both inside the hall and people outside waiting for the flag and the silence.

What has been intriguing me over the years is the changing number and demographics of the people who are now turning up. When I first started attending in the early 1980s, after moving back to Mt Albert post-university, there were a handful of young people who attended. Many of those were, like me, involved in the defense forces. Most attending were veterans of various wars that New Zealand had been involved in and their immediate family, or people who’d lost someone. The average age was grey (like I am now). 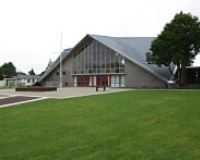 This year, the hall was full to standing room only, and it is a large hall. But the growing crowd outside intrigued me more than the service inside. This year, I saw teenagers coming on their own, not in groups or family, and standing on the grass outside waiting for the reveille. There were families with parents in their 30s watching the parade. The slowly growing crowd outside were obviously just stopping by in the course of whatever they were doing to attend the service. They stood patiently even with the little wisps of drizzle in a typical Auckland sort-of-a-winter day.

The reason for these people to come was not so much the concept of war and valor that would have been typical of an earlier era. It was for the message that Jonathon Dove, a pastor at the Mt Albert Baptist Church gave in his address: respecting the service of people helping or defending their community and other people.

This is a political blog, so I’ll offer my opinion on the meaning of ANZAC day in the context of politics. Service is one of the societal assets under-valued by our current government and particularly by their more extremist supporters. They value money and power – not the people doing public services that allow society to function. What they don’t value, they denigrate.

I first noticed Helen Clark at a Mount Albert ANZAC service in the early 80s. As local MP she turned up virtually every year and made the speech regardless of where she’d been the previous day. There were a few occasions I’ve heard of where  she stepped off an international flight and attended prior to getting home. Today she sent greetings via Phil Goff who did a speech at the service. This dedication to attending the ANZAC services has never been particularly for political purposes. There would have been easier ways to garner support for Labour, and with less effort. It was  interesting to me.

Helen was well known as a anti-Vietnam war activist in the 70s, and, as a young territorial soldier in the early 80’s, I was intrigued by her turning up to a memorial service for fallen soldiers. So I went a few times to other meetings where she was speaking. It wasn’t too long before I discovered her intense respect for people who serve, either as soldiers, in the community,  as activists or as protesters.

All those engaged in service violate the neo-lib/neo-con ‘ethic’ of looking out only for yourself.  Since neo-liberals depend on the stable running of society to pursue their own interests, they operate as free-loaders on the efforts of others to maintain a civil and just society. Since they do not understand the urge to help others, they denigrate. An obvious example is that well- known serial liar Ian Wishart, who is continuing his campaign against Helen even when she has left the country (the fantasy is now that there is a world government conspiracy). However others such as Rodger Kerr and Tony Ryall come to mind as  examples of people happy to take  advantage of the stable society enabled by the efforts of those who serve.  They use this to further their own interests while denigrating the efforts of those who create the environment they need to do so. In reality they use the concept of “personal responsibility” to disguse their own nature as parasites on society.

These  neo-lib and neo-cons are the supporters of the current government – they taint it with their support.

42 comments on “Denigration of public service ”