Yesterday afternoon I received the email that you will see at the foot of the post (see updated note below). It starts with:-

I’m emailing you on behalf of Netsafe about a complaint we have received.  Under the Harmful Digital Communications Act 2015 (HDCA), Netsafe receives and assesses complaints about harm caused to individuals by digital communications.

Hummph. I have been wondering when I’d get one of those. This is what is known in the Act as being a “notice of a complaint” as specified in section 24 “Process for obtaining protection against liability for specific content”.  It means that a clock started running and I have 48 hours from when the notice arrived in my mailbox to when I have to have made a decision. The notice came from Netsafe under section 25 (1) “Further provisions related to section 24“.

Updated: Netsafe asserts that this email wasn’t a “notice of complaint”. It had all of the provisions of one under section 24 listed below, I’d say that if it waddles and quacks like a duck – then I and any reasonable person would suspect that it is a frigging duck and take steps to reduce the shit problem.

They also asserted that the email was private and shouldn’t have been published. In which case my question is where did they request that in their email?

However the act has specific provisions that are meant to be supplied to me to help me make these kinds of decisions. Netsafe apparently doesn’t think that the statute’s provisions do not apply to them. My notes in bold italic.

Nope. In fact they don’t even provide all of these details for Netsafe (otherwise I might have gone there this morning rather than writing this post)

(i) is unlawful; or       Didn’t claim that – not relevant.
(ii) breaches 1 or more communication principles and has caused harm; and

Did claim that but did not explain WHY each principle was breached or how it caused harm.

(c) sufficiently enable the specific content to be readily located; and

They did do that. Unfortunately the content wasn’t on our site. I am also pretty sure that the content was actually released in 2014 as part of a massive dump which predates the act which was passed in 2015. A phrase in the specific material linked to was distinctive. For that matter neither of the authors of the specified material are authors on our site, and nor was the person who released it.

They did not provide this at all. This particular post had a number of sections in it

(e) contain any other information that the complainant considers relevant.

In  other words Netsafe failed almost every part of the mandated requirements for a notice of complaint. Those provisions were put into the act with a definite purpose. They were there to provide the site operators and authors enough information to make decisions about liability, and to do the balance between protecting their authors/commenters and the legal issues. There were also specific provisions about what private information could be passed on.

Why such specific provisions? Because most of us have been doing this social networking for way longer than whatever underpaid flunkies that an organisation like Netsafe could employ. In my case, I first went active on a social network back in 1979 at the University of Waikato’s internal network. Moreover I’m a computer programmer by profession and still working at it at age 57 and currently working 10-12 hour days to finish a project.

None of the operators on social networks have time for playing phone or email tag over a 48 hour period. It was way too short. That required that the people providing the information to us actually provided relevant information.

The legislation was written to minimise that kind of ridiculous meeting times, so the provisions were made tight. Clearly Netsafe failed to understand this. This was predictable and predicted by many of the presenters to the select committee and elsewhere. So was that the majority of complainants would be adults rather than the kids that the bill sponsors said would be the bulk of the work.

But here is the kicker, guess what the complainants post was about? Two of the key figures from Dirty Politics in a passage from the dirty politics dumps about the dirty politics that they were playing over the port worker strikes. Cameron Slater was almost certainly being paid by the Auckland Ports to try to break the strike. Jordan Williams was digging up information to assist from ‘friends’. 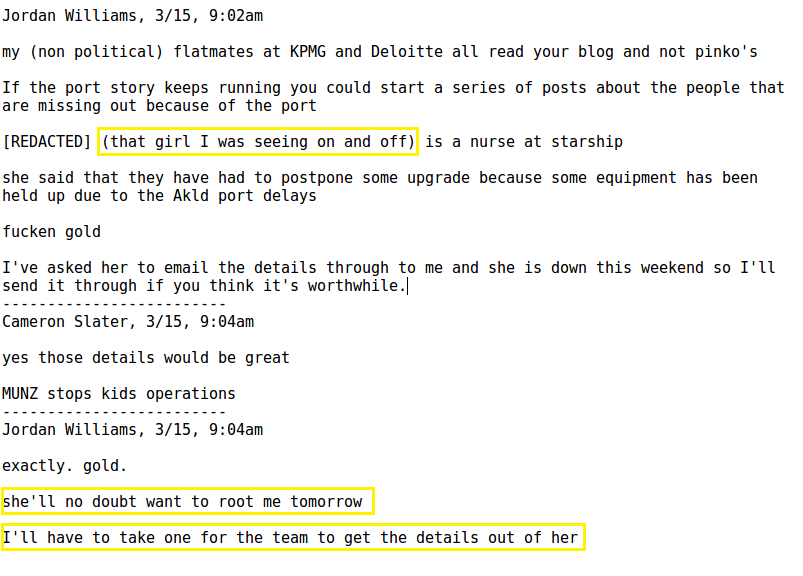 Ah yes. But face it. There are three players in this mix. One is the ‘nurse’. So what do I have to make a judgement on?

Information within the 14 September blog post (specifically, the material obtained from http://4.1m.yt/vqrExQE.png) appears to breach communication principles in the HDCA (specifically principles 3, 6 and 7). It also appears that the blog content is causing serious emotional distress to the complainant.

Section 6 of the act gives these.

3. A digital communication should not be grossly offensive to a reasonable person in the position of the affected individual.

6. A digital communication should not make a false allegation.

7. A digital communication should not contain a matter that is published in breach of confidence.

Unfortunately I can’t tell which of these three people this relates to. So I’m going to make a call here. This reads to me like a Dirty Politics move. It could be either the Jordan Williams (Slater’s ex-lawyer), or it could that legal dimwit that Cameron Slater goes in and out of court with and why he is steadily losing to Matthew Blomfield and others in court (and vice versa).

I can’t see how the nurse would view a conversation between two other parties about her to be confidential. While the conversation would be grossly offensive for her, I can’t see how she could allege that the statements were false.  She wasn’t a participant in the conversation. It was unlikely that she would have been aware of it until the release of the dump. What breach of confidence? These were the musing of a ‘man’ who appears to spend a lot of time dreaming up misogynist comments (see the post link below).

For the other two, the claim of a breach of confidence does rather disagree with the false allegation claim (either it is made up or it was stolen – it can hardly be both). That would tend to indicate that at least one is at variance with the truth. Since it is well known that the conversations were stolen, there was no breach of confidence. But I’d be happy to provide my considerable skills on any digital originals that Cameron Slater still has in his possession (and for that matter Rawshark and/or Whaledump) to determine which (if any) was fraudulent. However I can’t see and have not been provided with any evidence that this one is.

It is also quite clear that neither party to this and other conversations, as were pointed out in the post “Beware, creepy men of the right: Rawshark returns (briefly)“, could possibly have been “grossly offensive to a reasonable person in the position of the affected individual” at the time period when the conversation was taking place. After all Cameron Slater and Jordan Williams were the participants in many conversations that gave them a well deserved reputation of being complete gormless boastful dickheads after the publication of Dirty Politics. We have to be guided by the position of either affected individual at the time. How could they be so offended about themselves?

Why I can write this post? Well there is no requirement for me in law to keep it private.

Netsafe didn’t gag me with the privacy provisions in the Act because they didn’t tell me who the complainant was. I have to guess, just like everyone else. Of course being around politics in NZ for the last 30 odd years, it usually isn’t that hard. That was how we saw dirty politics going on a decade ago on the local net. And that is why I can smell it in this action and the way it has happened. I don’t care if dirty politics comes from sleazebags like Cameron Slater (the guy who tried to get someone to hack my personal computers) or his ex-lawyer Jason Williams or even from that recent government beneficiary Netsafe.

If it does turn out that the complainant was the nurse and that Netsafe didn’t tell me, then I’d say I am sorry, that I’d reconsider the specific material when I know more details and that Netsafe should have damn well followed the Act. That is after all what they are paid millions of dollars per annum to do.

In the meantime, I will head off for another long day at work chasing bugs. Hopefully I will be back before 8pm to an email from Netsafe repairing their deficiencies.

The ridiculous notice of complaint.

I’m emailing you on behalf of Netsafe about a complaint we have received.  Under the Harmful Digital Communications Act 2015 (HDCA), Netsafe receives and assesses complaints about harm caused to individuals by digital communications.

The complaint relates to two blog posts hosted on The Daily Blog, which are:

· a blog post published on 14 September 2016 by Stephanie Rodgers  https://thestandard.org.nz/beware-creepy-men-of-the-right-rawshark-returns-briefly/

Information within the 14 September blog post (specifically, the material obtained from http://4.1m.yt/vqrExQE.png) appears to breach communication principles in the HDCA (specifically principles 3, 6 and 7).  It also appears that the blog content is causing serious emotional distress to the complainant.

We ask for your assistance.
As the host of these blog posts there are some steps you might take to help resolve this complaint including:

I would appreciate it if you or the authors could confirm, within the next 48 hours, what steps you/they have taken.

If Netsafe is unable to resolve this complaint, then the person who made the report has the option to make an application to the District Court for court orders under the HDCA. This may result in court orders being made either against you (as the host of the content) or against the author/s.

You can find out more about the HDCA and its new civil regime here. If you have any questions or would like more information (for example, to help you identify the content which may breach communication principles), please let me know.

48 comments on “Dirty Politics done in the Netsafe style. ”