Does the left win by tacking to the centre or by being principled? 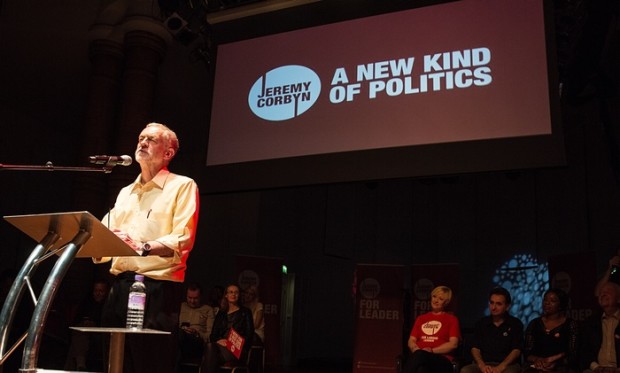 Well done Jeremy Corbyn.  It is great to see a plain speaking principled politician succeed.  Clearly Jeremy and Bernie Saunders in the States are indicative of a growing restlessness amongst activists with political business as usual where careerists using triangulation as their only weapon have been dominant for some time.

As the right wing dominated media throughout the world is prone to do, in Aotearoa they have pontificated about how having a conviction leader who speaks simply and says what he thinks would be a very bad idea.  Better to have careerists who know how to play the game and whose words are filtered through many layers of PR advice rather than have someone who actually wants to have a proper discussion about our future.

Here are some of the words that Hosking came up with:

Jeremy is about to become the new Labour leader in what really has been the most astonishing political race I can remember.

He is not just going to win but win in a landslide.

I ask this because Jeremy will never be Prime Minister; he will never win an election.

Jeremy – if you haven’t followed proceedings – is about as far-left of the political spectrum as you can get.

Jeremy wants to print money, he wants trades people to retire early, he wants to increase taxes, he can’t think of a reason to deploy the military – not that he’ll have one because the cutbacks will be historic in their size – and he wants to re-nationalise industry.

He is a stark raving loony.

Don’t hold back Mike.  His criticisms are something of a gross misrepresentation but the things that Hosking is complaining about are actually good things.  Quantitative easing has been used throughout the world for some time to hold off economic malaise and it has worked.

Increasing taxes?  Well the gross inequality that exists has been shown to be bad for everyone.  Sure Mike’s English mates would have to pay more if Corbyn wins but at least poverty could be addressed.

Wanting trades people to retire early is merely recognition that many tradespeople’s bodies are flogged out before the age of retirement.  Such a policy is humane not loony.

I can think of millions of reasons for not deploying the military, many of them who are flooding into Europe now.  And without committing himself to do so Corbyn has talked about nationalising major power providers and rail.  New Zealand has renationalised rail without problem and not so long ago we owned most of the power generators in the country.

Hosking is also one who believes that political battles are not won by superior PR campaigns or money or activist effort but by which party is able to sail closest to the centre.

I don’t believe he is right.  Helen Clark was brave enough to propose that New Zealand should aspire to being carbon neutral.  People do actually like leaders who lead.

Hosking has an unusual supporter who is saying the same things, Labour’s David Shearer.  He said this on Facebook:

Corbyn’s supporters could be right … for the first time in modern political history we may see a leader shun the centre, steer a party to the left and win an election.

But more likely it will guarantee Labour stays in ‘glorious’ opposition as it did during the 1980s and 1990s – until finally it reached out to voters in the centre and won three elections in a row. But until then Thatcher and the Conservatives ran rampant for 18 years.

Too often we forget that being in government is the objective. Anything else is just academic discussion.

Meanwhile, the Conservatives are gleeful. Many joined the Labour Party under Labour’s new voting rules just so they could vote for Corbyn.

Sadly, the stakes are heavily tilted against a positive outcome for Labour – and with it the majority of hardworking, decent Brits.

The problem with tacking to the centre and a goldilocks approach to policy formation is that the result is almost inevitably insipid.  Take for instance climate change.  National has been adept at working out a position that its supporters and big business approve of and has weakened the emissions trading scheme to the stage where it is an pallid imitation of what is required.  And National’s commitment for the Paris Convention is both hopelessly weak and completely unobtainable given current policy settings.

A politician’s role should be to lead and persuade not follow public opinion.  In the immortal words of Mhairi Black they should be sign posts and not weather cocks.

162 comments on “Does the left win by tacking to the centre or by being principled? ”