David Shearer has criticised the Australian Government as having lost its “moral compass” in relation to the Nauru Asylum Detention Centre.

Goff and Shearer’s disloyal and self serving support for the TPPA has backfired. They’ve shown that the ABC faction are now a spent force and that Andrew Little has the overwhelming support of caucus. The sun has set on the splitters and there is a new day rising.

David Shearer has disagreed with the Greens that New Zealand should suspend negotiations on the free trade agreement with Saudi Arabia until it improves its human rights record.

McClay said he could not answer the specific question because he had “been advised” no such data exists.

Amnesty International has published a report “By Hook or by Crook: Australia’s Abuse of Asylum-Seekers at Sea” which has rightfully been described as a damning indictment of Australia’s handling of the refugee crisis. But New Zealand benefitted from payments of money to people smugglers.  What did the Government know?

Does the left win by tacking to the centre or by being principled?

Jeremy Corbyn’s election provides a further opportunity to discuss if elections should be won by  tacking to the centre or adopting a principled approach to politics.

The Greek Finance minister has unexpectedly quit. He had already said he would resign if the referendum was lost; nobody expected that he would go after such a stunning win. But it was the strategically correct thing to do. Why can’t some of the veterans in the NZ Labour Party take the hint?

Its 100 days since the NZ Labour Party elected Andrew Little as its leader. What an inspired decision that has turned out to be! Little has galvanised the party, united the caucus and looks set to be the next PM. How has he turned Labour around?

So, we’re off to Iraq. If the answer to ISIS isn’t sending Kiwi troops, what do Standardistas think practical alternatives might be?

It might well be in Labour’s best interests to cut the crap now and go into coalition with the National Ltd™ Cult of John Key. It would be the honest thing to do. Kiwis will then know where the boundaries lie and who actually is working to oppose the implementation of the wider neo-liberal ideology.

David Shearer has chosen to publicly call for unity while at the same time attacking David Cunliffe and the concept that Labour’s leadership should be representative.

David Cunliffe has just announced that he will seek to continue as leader of the Labour Party and will let the party decide.  A contest for the leadership is almost inevitable.

Our children in Wellington

I’m pretty sure that David Cunliffe would win a members and affiliates vote. So suck it up MPs, stop playing your silly caucus games and do some frigging work this term rather than the self-indulgent posturing you wasted time with last term. We have to start building campaigning machinery as soon as possible. You are getting in the way.

The ratings/sales driven ethos of the corporate MSM skews the coverage of the election campaigns of parties of the “left” and the “right”. Focus on individuals, implying they represent large sections of the population. The left are leading the agenda on inequality.

Details of the Labour Caucus changes are now appearing in the media.  The update is Parker, Robertson and Jones will be the core of the economic team, King retains Health, Shearer gains Foreign Affairs and Cosgrove and Hipkins retain their current responsibilities.  Mahuta and Moroney are elevated to the front bench and this will help gender balance.

Big announcement at 1:30 … Shearer stands down as leader

It is confirmed that David Shearer has announced that he will stand down as Labour’s leader after a new leader is selected.  The leadership will now be decided under the Party’s constitution.

John Key has been twisting himself out of shape answering questions about spying on New Zelanders by the GCSB under the GCSB amendment Bill that is currently before the House. [Update] Video Qu One & Three [Update] Qu 1 transcript.

The non-resident property speculators are….?

Patrick Gower’s report on TV3 6pm News tonight, on Labour’s housing for Kiwis policy, shows what is wrong with corporate infotainment TV news.  He gets tonight’s award for Jonolism.  Here’s hoping the Campbell Live tonight will show Gower how it should be done. [Update: Campbell interviews Ferguson]

Some photos from today’s Auckland protest.  It was a great occasion.  The question needs to be though, where to from here?  This momentum needs to be built on. 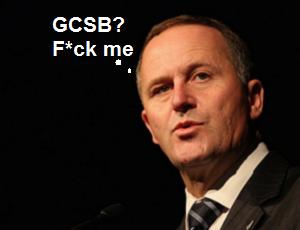 The stop the GCSB Bill meeting in Auckland last night was well attended and had a series of high quality presentations made.  A series of protests are planned for this weekend.  Momentum is building …

John Key and David Shearer have made similar (inaccurate) statements about who has  ultimate responsibility for feeding the kids.

Power profits and the consumer

New Zealand’s energy pricing over the last twenty years was thoroughly canvassed by Dr Geoff Bertram last year in a paper presented to the Fabian Society as part of its “Light-handed Regulation” series.  In the light of the Labour/Greens’ announcement last week about NZ Power his paper is well worth a read.