Doing nothing as dole numbers rise

It was a year ago that Paula Bennett first declared victory over rising unemployment. Since then, John Key has been working his economic strategy hard: high-fiving every schoolgirl he can find, playing with spiders, announcing and re-annoucing literally tens of kilometres of cycleway, smiling and waving till it hurts. But dole numbers are rising.

Now, maybe Paula Bennett (when she gets back from her holiday in the US) will blame seasonal variation. Well, sorry, but the seasonal variation should be in the opposite direction. Over Labour’s nine years in power, the number of people on the unemployment dropped by an average of 1.2% each year between August and September. National’s record is an increase of 2.6% last year between August and September, and 2.1% this year for the same period. Remember, the recession officially ended in March last year.

I’ve graphed these numbers lots of different ways to show you that there is still a real, not just seasonal, increase in dole numbers occurring. Here’s a new one. If Bennett was correct and unemployment started falling this time last year, then the number on the dole this September should be less than the number on the dole last September when unemployment supposedly peaked, eh? 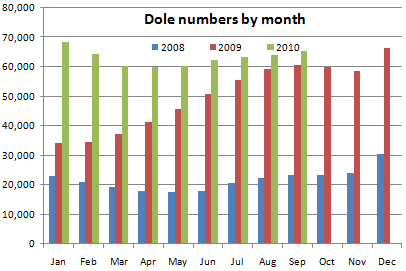 As you can see, the September dole number was well above what it was last September, when unemployment supposedly started to fall.

There’s a chance that some of this increase is earthquake related. If it is, that’s just all the more reason why the government should have stepped into with a proper plan to protect jobs in quake-affected businesses.

But I don’t think that the quake has destroyed thousands of jobs without us hearing about them. No, this is the same story of a nationwide malaise, small job losses here and there, nearly no new jobs being created. All presided over by a do nothing Prime Minister and an incompetent Minister.

PS. Bennett is on holiday in the US for this whole month. So, Tony Ryall answered her question in the House yesterday. Fortunately, he had read the formulaic answer:

“Just this morning I received the monthly benefit figures for September, which show that 5,890 people had cancelled benefits because they had found work.”

Hmm. If 5,890 cancelled their benefit because they got a job and the net increase in dole numbers was 1,380 (and more cancelled because they died, reached retirement age, moved overseas, moved on to another benefit etc)  that means at least 7,270 people went on to the dole because they lost their job in September. That’s a scary big number. And a problem that Ryall’s answer shows the government doesn’t even want to acknowledge exists.

17 comments on “Doing nothing as dole numbers rise ”