If someone had said two years ago that the President of the United States would be picking a fight with Canada while at the same time buddying up to North Korea they would have been met with ridicule. And questions about their sanity.

But this is what is currently happening.

It started with Donald Trump picking a fight with Canada about agricultural tariffs just before the G7 leaders were to meet in Canada.  And Trudeau had made it clear that Canada opposed being treated in this way by its nearest and closest neighbour.

Canada charges the U.S. a 270% tariff on Dairy Products! They didn’t tell you that, did they? Not fair to our farmers!

Justin Trudeau responded by trolling Trump with the most exquisite gift that could be imagined, a photo of the Hotel that Trump’s grandfather used to run a brothel from.

…did no one on Trump’s press team recognize this was a not-subtle dig that the Trump family fortune came from running a brothel?! https://t.co/TV6CsqtLs1

Someone more astute than Trump must have noticed and told Trump because his demeanour at the G7 meeting being held in Canada it denigrated into a G6 verses Trump stand off. 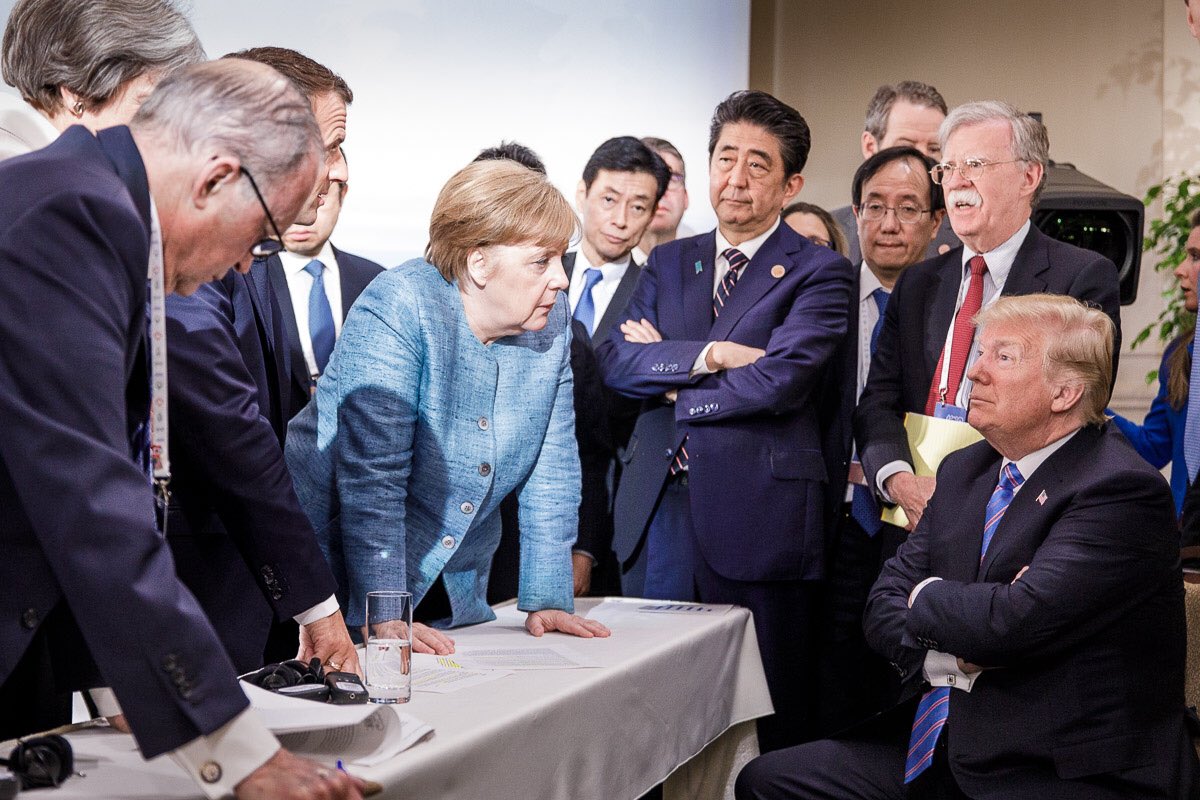 Then after the usual communique was signed Trump threw a big spanner into it by essentially repudiating it.

Donald Trump has left the G7 network of global cooperation in disarray after he pulled the US out of a previously agreed summit communique, blaming the Canadian prime minister Justin Trudeau whom he derided as “dishonest and weak”.

The US president, who arrived at the summit in Canada late and left early to fly to Singapore to prepare for his summit with Kim Jong-un, shocked fellow leaders with a bellicose press conference on Saturday in which he attacked the trade policies of other countries.

The US had nevertheless appeared to agree a form of words on contentious issues thanks to an all-night negotiating session by officials from all sides.

But after leaving for Singapore, Trump tweeted personal attacks on Trudeau and said that he had told his representatives not to sign the summit communique, turning what had already been a tense meeting of the world’s leading industrialised democracies into a fiasco.

“PM Justin Trudeau acted so meek and mild,” he tweeted. “Only to give a news conference after I left saying that ‘US tariffs were kind of insulting’ and ‘he will not be pushed around’.

“Very dishonest and weak” he claimed, adding in a separate tweet: “I have instructed our US reps not to endorse the communique.”

The tweets are outrageous.

Based on Justin’s false statements at his news conference, and the fact that Canada is charging massive Tariffs to our U.S. farmers, workers and companies, I have instructed our U.S. Reps not to endorse the Communique as we look at Tariffs on automobiles flooding the U.S. Market!

PM Justin Trudeau of Canada acted so meek and mild during our @G7 meetings only to give a news conference after I left saying that, “US Tariffs were kind of insulting” and he “will not be pushed around.” Very dishonest & weak. Our Tariffs are in response to his of 270% on dairy!

And they were followed up by the Trump regime throwing further barbs at the Canadians. Again from the Guardian:

Donald’s Trump’s chief economic adviser said the US pulled out of a G7 communique because the Canadian prime minister, Justin Trudeau, “stabbed us in the back” and accused the leader of one America’s most important allies of playing a “sophomoric political stunt for domestic consumption”.

In an extraordinary interview with CNN’s State of the Union on Sunday, Larry Kudlow, who was present for negotiations at the G7 summit in Quebec over the weekend, said Trudeau had instigated “a betrayal” and was “essentially double-crossing President Trump”.

Trudeau used a media conference on Saturday to reject a US demand for a sunset clause in the North American trade agreement, Nafta, that Trump has at different times pressed to abolish or renegotiate. The prime minister also said Canada would “move forward with retaliatory measures” in response to the Trump administration’s move to impose tariffs on aluminium and steel imports from the European Union, Mexico and Canada.

The move enraged Trump, who branded his Canadian counterpart “dishonest and weak” in a furious tweet, announcing the US would pull out of an agreed communique.

The G7 communique said the leaders of seven of the most powerful countries in the world agreed on the need for “free, fair, and mutually beneficial trade” and the importance of fighting protectionism.

Kudlow added that Trump had made the decision to pull out of the agreement in an attempt to save face ahead of his historic summit with North Korean leader, Kim Jong-un, in Singapore.

“Potus [the president of the United States] is not going to let a Canadian prime minister push him around – push him, Potus around, on the eve of this,” Kudlow said. “He is not going to permit any show of weakness on the trip to negotiate with North Korea. Nor should he.”

And Trump is now in Singapore where he will meet with North Korean leader Kim Jon Un. The contrast in treatment is startling.

I am on my way to Singapore where we have a chance to achieve a truly wonderful result for North Korea and the World. It will certainly be an exciting day and I know that Kim Jong-un will work very hard to do something that has rarely been done before…

I cannot blame Trudeau for his responses to America’s threatened imposition of tariffs. I am sure that politically Trumps’s behaviour is not hurting Trudeau.

It is astounding that international relationships amongst Western Nations is now dependent on leaders not showing Trump up. And it is very clear that the six other members of the G7 are united in their view of who is in the right and who is in the wrong.