Michael Littlewood has made a career of advocating superannuation privatisation and is part of an international organisation called Pension Reforms dedicated to the privatisation of superannuation. Yesterday, he was given a platform in the Herald and on the news (one or three, can’t remember), to argue the New Zealand Superannuation Fund (known as the Cullen Fund) should be abolished or put on hold during the recession. That advice is economically illiterate and shows no understanding of the nature of long-term investments. It is more of the short-term, dumb thinking that got the world economy into this trouble in the first place. It says (and I know I hit this point a lot) something about our media that this guy got to spout his ideological rubbish in the Herald and on the news without his credentials, his agenda, or the quality of his advice being questioned or even mentioned.

Let me put this simply: if you are in it  for the long-term and you believe that the world economy will eventually rebound, now is a good time to be investing in assets because their future growth will be faster than their long-term average  growth.

I’ve tried to show why this is graphically. The wavy red line is the value of an asset, maybe a share or a bond or a house. The blue line is the long-term average value of that asset, basically the boom/bust cycle flattened out. The green zone represents a boom, the orange zone a bust. 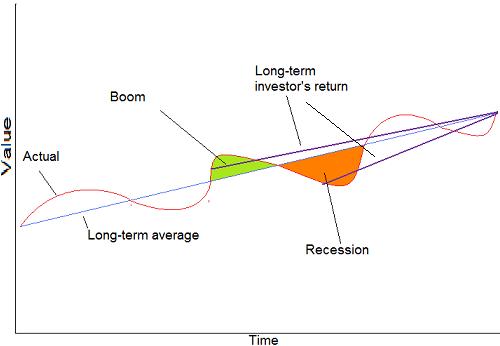 Now, if you’re a short-term thinking money-man, you want to be buying when the red line is climbing the most rapidly and selling before it starts falling. But if you’re a long-term investor, when is the best time to be buying this asset? During a bust, because the value is below the long-term average value, you are going to get a greater average growth rate than the average for the asset and much greater than if you were buying during a boom – check out the angle of the two thick purple lines compared to each other and the average.

If you a investing for your retirement, or you are a government retirement fund designed to not even begin paying out money for ten years and then keep going for the next half century, or you are a sovereign wealth fund, or you are any kind of investor looking for a long-term gain who doesn’t have to worry about short-term loss (and you don’t believe we are at the start of a permanent period of economic decline), now is the time to be buying, while people are willing to sell you stuff for less than it is worth in the time-frame that matters to you. Sure, for now, we are borrowing, at low sovereign rates, the money we are putting into the fund but the long-term return on that investment will be much greater. To his credit, John Key makes much the same point.

My concern is that the hard right in National/ACT with the same privatisation agenda as Littlewood will see an opportunity to exploit economic illiteracy in the political media to kill the Cullen Fund, and cripple the future of superannuation in New Zealand.