The ANZ survey shows business confidence at the lowest levels since the financial crisis. Yesterday John Key insisted that it was “reasonably positive”. He was either completely wrong or lying through his teeth. Either way it’s unacceptable.

There never was a rockstar

We’ve just seen the weakest quarterly growth in two years, and economists are warning of possible recession. The NZ economy needs to be fundamentally reshaped.

Today leaders of 3 opposition parties took part in an historic press conference.  Winston Peters, David Shearer and Russel Norman jointly announced the launch of a parliamentary inquiry into the crisis in manufacturing. Update: Links to articles added. One News Video.

English on the economic turmoil

As most of the headlines this morning focus on the crumbling world economy, it was interesting to hear Bill English on RNZ.  Among various inane comments there was one interesting gem, when English called for higher taxes…

It’s a bit of a worry that the PM seems to be clueless about the complexity and interdependence of the world economy. Bill English needs to take him aside and paint him a picture.

Economist Paul Krugman argues that governments the world over need to wake up to the fact that they’ve been trying to solve the wrong problem.

Ready for round two?

The global financial system, which has never properly recovered from the recession, is poised on the brink of a second crash.  The headlines are a parade of bad news…

Update: US credit rating downgraded from AAA to AA+ with negative outlook (same as NZ). Announcement was made after close of markets. It’s gonna hit the fan on Monday. 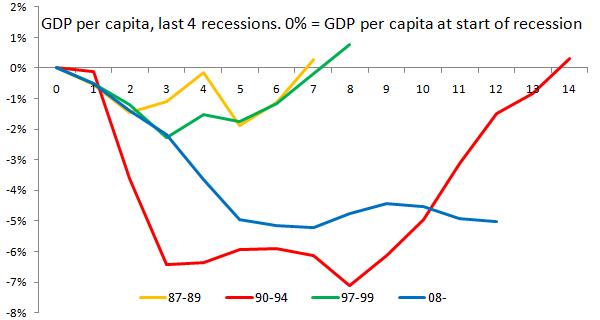 A hell of a speech

“The worldwide recession is not your fault… You are being softened up for cuts in social spending… It’s easy to see the people this government is looking after. If you are a bank boss on $5.6million, helping cause a recession, you get an extra five thousand a week. If you are on the minimum wage – you get an extra 25 cents an hour.”

The other day I was arguing $100 a barrel oil equals a global recession. I wanted be more precise: is there a certain price of petrol, above which the economy goes into recession? There is, and we’re way above it. The political upshot: the best way to promote growth is decreasing our oil dependence.

To get enough oil for global demand requires expensive technologies, and expending more energy. If the price is too low those investments won’t be feasible, meaning not enough production. But too high and the world can’t afford it and we enter global recession. The ‘goldilocks’ in the middle is shrinking, to a knife edge. It’s the same story with food and metals.

I read a book a while back that was set in the near future after what it called the ‘Domino recessions’ – successive oil shocks had created a series of economic and political crises, each one before the world had recovered from the previous recession. As the second oil shock in three years hits, that scenario looks to be coming to true.

Whitcoulls has been here since forever — “one of New Zealand’s most famous and enduring retail chains”.  But the chain is in big trouble, and it’s sad to watch the ongoing wreck.  Let’s hope that Whitcoulls can be saved before hundreds more workers and families in NZ lose their livelihood to the moribund economy.

8,000 more unemployed in Q4 2010, and 1,000 more on the dole in January; New Zealand headed to a douple-dip recession after a year of anaemic growth; an average wage rise in 2010 of 1.9% with inflation of 4%. And a government focussed on manipulating statistics instead of coming up with an economic plan.

By every significant measure our economy is a mess.  Bill English is finance minister for what is looking increasingly like the most useless do-nothing NZ government in living memory.  So is he working on a plan to put things right?  Is he rolling out the big ideas that will get New Zealand moving again?  No – he’s lashing out at public servants.  Pathetic.

Economic recovery despite the Nats

Pundits looking to talk up the economy are hopeful that things will improve in 2011.  National have done more harm than good, but there some encouraging signs too, arising from external factors such as high food prices, and returns on old investments such as NZ Super.  The NZ economy will eventually recover.  Not because of the Nats, but in spite of them.

This post from the Oil Drum looks at how peak oil and the economy interact. From 2004 to 2008 oil prices rose and rose with demand. But high prices bought nearly no new oil to the market because it isn’t there. The prices broke the global economy, destroying demand. Now, prices are rising again and the weakened economies will topple much easier.

The Two Nations: or, Why Won’t They Bail Me Out?

Under the supposed rules of capitalism, investors take a “haircut” if an investment goes bad – no reward without risk. It’s also Economics 101 that giving relief to the ‘little people’ will have a more stimulating effect on the economy than if you bail out the wealthiest interests in society. But the powers that be are breaking the rules to aid the rich.

No, this post isn’t about Smile and Wave’s failure to close the gap with Australia. It’s about the widening gap between the tiny elite in this country and the rest of us. Even before the Great Recession, 10% controlled more wealth than the rest of us combined. The housing market shows that their wealth is still rising while ours falls.

The economy shrank by 0.2% in the September Quarter. None of the forecasters had dared to predict it would be this bad, except yours truly : ) because I looked at the facts, rather than being taken in by Key’s rosy spin. The money trader’s economic record is looking pretty disgraceful now, isn’t it? Hope smile and wave is enjoying the Hawaii sun.

All those who think Keynes is dead (and those who merely wondered what happened to him) should check out the website of George Soros’s Institute for New Economic Thinking (INET). A remarkable range of economic luminaries are presented on video and powerpoint, most or all of them arguing for a radical Keynesian solution to the financial crisis.

Liam Dann had a very good piece in the Herald the other day about rising commodity prices. Despite insipid growth, prices of food and oil, the fuels of our civilisation are through the roof. The underlying meaning of those high prices is we’re having to devote more of our resources to feeding and fueling ourselves, leaving less for anything else.

The day that never comes

National Bank has joined NZIER in estimating the economy shrank 0.2% in the September Quarter and all the projections say it’ll go backwards this quarter too. Bill English now admits John Key’s ‘rapid recovery’ isn’t happening. But he insists it’s coming – tomorrow, no, the day after for sure. We’ve just got to keep waiting…

Here’s a little something that Kris Fa’afoi and his team might like to being to the attention of Mana voters as they prepare to go to the polls. On National’s watch, the median Maori income has fallen 11.5%. For Pacific Islanders the fall’s 19%. Pakeha are down 2.6%. No tax cut for the rich can cover the gaping holes in those family budgets.

Wages rose for the rich and fell for the poor this year, according to a Employers and Manufacturer’s Association survey. Managing Directors got a 3.7% rise from $190k to $197k, whilst the unskilled production workers beneath them saw their wages drop 6.5% or $2000 to $29.5k.

The recession, combined with this government, hurts the poor the hardest.

The just released Income Survey is more evidence of the Key Government’s failure to deliver for working Kiwis. After inflation, this is the third successive year in which the median income of New Zealanders has fallen. It’s now nearly 5% lower than when National came to power. This year alone, the median income fell 3.5%.

Hickey on fighting the currency war

Bernard Hickey continues his politico-economic rebirth. Yesterday, he wrote on how New Zealand can protect itself from dangerous international capital flows that undermine our economy and our ability to choose our own path. We shouldn’t leave the guidance of our economy to the invisible hand of blind, fallible, and valueless markets.

A Case of IHG?

Seems these days that when people get in to financial strife, the Government is all too happy to offer a helping hand loaded down with wadges of cash.  Sometimes…

And then sometimes something altogether more short and sharp is offered. Depending…

The NZIER survey of business opinion shows that the economy shrank in the September Quarter. The December Quarter was already forecast to be negative and the Christchurch quake will make it worse. So, we’re almost certainly back into recession. That’s going to blow out the government’s debt. The underlying cause is peak oil.