No, not another post about Bludger Bill, this one’s about that thing that he and Key are meant to be taking care of. What’s it called again? No, not the cycle-way. No, not solving disputes over wills. Um, bear with me, it’ll come back to me.

That thing? But everything’s OK now isn’t it? The recession’s nearly over. There’s more job losses and wage cuts coming but they’re just a ‘lagging indicator’. Growth will be back soon and we can start to put all this unpleasantness behind us. Happily ever after.

Wait, not so fast. Now mainstream economists are saying what we’ve been warning for some time. The end of this recession may be a false dawn. Sure GDP will grow start growing again for a while but the fundamental problems that sent us into recession – oil supply, toxic financial assets, over-investment in housing – have not been addressed, they’ve only been temporarily alleviated by falling economic activity.

Yesterday, ANZ economists warned there is a danger of ‘double-dip’  or ‘W’ recession – growth at the end of this year turning into more contraction new year:

“the way commercial construction, the unemployment rate and dairy incomes are shaping up, there is a huge void to fill. The real message in our `W’ cycle is that we do not believe recent signs of recovery are of sufficient quality (that is, it’s the wrong growth mix) to be sustainable, given NZ’s external and balance sheet position.”

They think that if we’re lucky, we might avoid just a second recession next year. But I think that the risks are more to the downside. The ANZ analysis hasn’t looked at the possiblity of international shocks to our economy if other countries also double-dipping due to more financial shocks and/or oil shortages (which the IEA is warning could happen from next year). 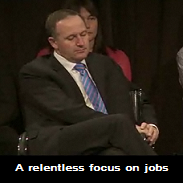 Our economy is still on shoddy foundations. The growth that is coming is being built, once more, on house prices rather than sustainable exports. That can only lead to the same result as the last housing bubble. It’s not a good outlook but we aren’t helpless. Once again, it’s the Government’s job to provide leadership by making the reforms that are needed and investing in the right areas (which we’ve discussed in depth in other posts). Instead, they seem to be in cruise control, assuming that everything is looking up and nothing needs to be done. The ANZ report should be a wake-up call, before it’s too late.