Bill English continues to tell outright lies about the economic performance of this country under Labour. This time it’s even more blatant. You don’t have to do any maths to check if he’s lying or not, you just have to go to the latest GDP stats.

In the 3 years from September 2005 to 2008 this economy grew by less than 1 percent. However, that figure was outstripped by annual population growth of 1.1 percent, meaning that over the last 3 years of the previous Labour Government, per capita income growth was negative

No it wasn’t you liar and you know it. Proving it is as simple as going to the GDP release table 6.2

Every year Labour was in power GDP per capita rose. The 2008 September year was 1.8% higher than the September 2005 year, even after inflation.

And what’s English’s record? Abysmal. In the last year, GDP per capita was down 3.7% from the peak.

Take a look, Mr English, this is what a real record of economic achievement looks like: 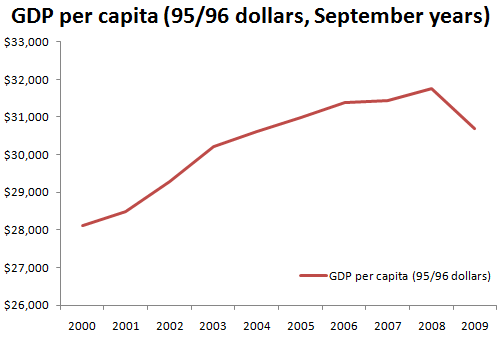 If you like, we can go further back and see the last time GDP per capita dropped. It was the last time English was in government: 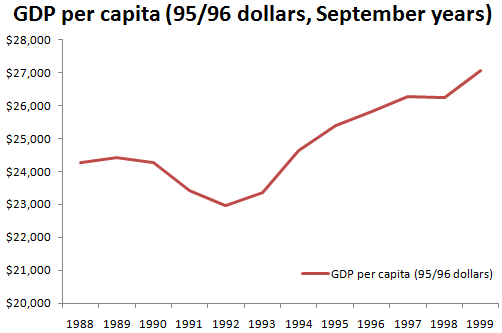 This has reached the point of purposely misleading the House. Labour’s got to do something. You can’t just sit by and let lie after lie go unchallenged. In the very least, you’ve got to challenge him to provide proof of this claims so that you can show them to be lies.