Simon Bridges has claimed that a GDP growth Jacinda Ardern used was wrong even though it was the figure released by Statistics NZ.

The Government has announced that the next budget will include well being objectives as well as fiscal objectives.

ANZ Bank’s Outlook business confidence survey has been forecasting gloom and doom for the economy ever since the surprise election result turfed out the National Party. Today’s GDP data showed the economy has actually been pumping along faster than the Reserve Bank believes is good for it.

This is not the growth you’re looking for 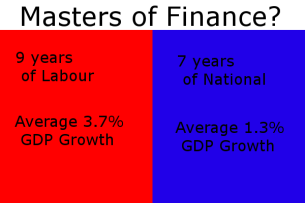 My regular Sunday piece of interesting, longer, deeper stories I found during the week. It’s also a chance for you to share what you found this week too. Those stimulating links you wanted to share, but just didn’t fit in anywhere.  This week: girls dying in recession, forgotten wars, and the spin of the Right.

The end of growth

Five to fifteen years of economic turmoil. Peak oil. Climate change. For “Western” / OECD countries it’s time to start creating a world based on a different kind of growth.

The Government have been pushing a line that Christchurch is holding us back as an economy.  The poor people of Christchurch are to blame for all our woes apparently, with their earthquake.  We shouldn’t blame National, just Cantabrians.

But it’s not true.

Farrar and others of the Right push for ever lower taxes, but their arguments are laughably flimsy.  Tax cuts don’t raise revenue.  Tax cuts don’t cause growth.  In search of their  “superior moral justification for selfishness” the Right are going to have to do a lot better than that…

Back in October 2010 the Nats were quick to claim credit for low inflation.  No doubt they will be just as quick now to accept the blame for inflation at a 21 year high.

This story didn’t get any big headlines. This story slipped by almost completely under the radar.  But it’s a very important story. Much more important for New Zealand’s development than the smoke and mirrors of the do-nothing budget.

Some facts on Wages, Inflation and GDP

John Key at a press conference yesterday made some claims about wages, inflation and Treasury predictions that really need looking at a bit more closely.

Flat as a pancake

The economy grew just 0.2% in the December quarter, enough to avoid the technical definition of recession but did it feel like that for you? No. It felt like recession because the economic pie grew slower than the population. National’s economic record is GDP per capita 5% below its peak and down another 0.6% between […]

Why ‘focusing on growth’?

The title of Don Brash’s latest exercise in making John Key appear moderate second 2025 Taskforce report is “Focusing on Growth”. Why should we be myopically focused on growth? Neoliberalism treats growth as an end in itself. That reduces us to mere cogs in the machine of ‘New Zealand Inc’. A healthy society is more than its GDP growth rate.

Bill English continues to tell outright lies about the economic performance of this country under Labour. This time it’s even more blatant. You don’t have to do any maths to check if he’s lying or not, you just have to go to the latest GDP stats. This has reached the point of purposely misleading the House and the public.

Leaky homes are a slowly unfolding disaster for the country. Someone is going to have to come up with $11bn (at least) in costs for repairs, and the government hasn’t a clue as to how to handle it. Still, every cloud has a silver lining they say, and for the government it is $2bn extra in taxes…

Today in the House David Cunliffe took Bill English on over his lies regarding Labour’s record on economic growth. Rather than admit that he had been using the wrong figures in an effort to make Labour’s record look worse, English compounded his sins by lying to the House.

I am flabbergasted that Labour has remained silent on Bill English’s repeated lie that the economy grew just 0.9% a year in Labour’s last term in government. This is your reputation and your legacy the little creep is lying about, guys. Stand up for yourselves.

Back in 1934, when Gross Domestic Product was first being developed in the States, the economist in charge, Simon Kuznets, wrote “…the welfare of a nation [can] scarcely be inferred from a measure of national income…”. Right from the start, the economists were saying GDP was merely a measure of economic activity, not of the wealth […]

Put it on the kids’ tab

Some may have noted an odd series of questions in Parliament and press releases from Bill English around government borrowing over the last month. The questions purposely conflated the idea of maintaining current debt levels with increasing debt. We noted this at the time and Tane correctly picked the strategy: First, sow confusion about debt […]