In this series so far I’ve examined three of the four terms in the Kaya Identity, population, economic intensity, and energy intensity. It can be conclusively shown that none of these factors can be reduced sufficiently to reduce CO2 emissions to zero – or even close enough to be useful. Let’s return to each one in turn:

Population. All the developed nations now have stable or decreasing populations. It’s only in the underdeveloped regions of Africa where population is still projected to increase this century. Human population will likely reach about 11b mid-century and then decline everywhere very gradually. This in itself will present many novel challenges as our demographic pyramids invert – but for the sake of this discussion we can set that aside.

Economic Intensity. While there is no question some small fraction of humanity engages in wasteful, excessive expenditure – the vast majority do not. We can, and for entirely tangential reasons moderate some of the excesses of the modern world, but any general proposal called ‘de-growth’ condemns around half of the world’s population to perpetual poverty, and much of the rest to never moving past the modest middle class life they’ve only just attained this last few decades. Moreover poverty is the crucial driver in large family size, which means driving that humanity back into a meagre standard of living will only have the perverse effect of driving up population growth rates again. And pushes poor rural people out into the remaining wilderness in order to scavenge for food or burn trees for charcoal. An imposed ‘de-growth’ agenda might look doable if you’re living a comfortable, economically padded life in the developed world – but for 90% of humanity it’s a disaster.

Energy Intensity. Put simply, while it can be shown that better technology has generally improved energy efficiency, the rate at which this is occurring is not keeping up with the increase in economic activity that is driving total human welfare.

The change over time of the these three factors is shown here. 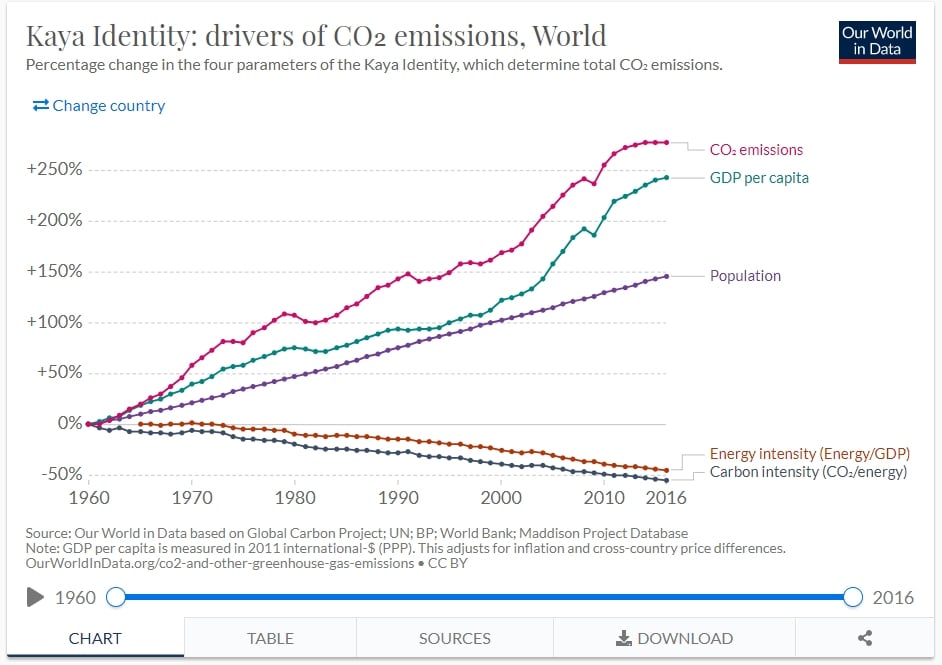 Careful examination reveals three crucial aspects. One is that economic growth dominates everything. We have started on a trajectory to escape poverty but at the cost of destabilising our climate. Secondly that while both energy intensity and efficiency have been steadily improving – the present dominance of fossil carbon in the mix ensures we can never achieve zero carbon by being more ‘careful’ with how we use energy.

And thirdly there is a perverse cross linkage between all three of these terms – decreasing energy reduces economic activity, which in turn increases population. All three are connected in a complex web of social and economic interactions that mean tinkering with one of these terms as a matter of policy, is likely to have unintended consequences in one of the other three.

This leaves us with the fourth term, the only one that technically stands on it’s own.

Carbon Intensity. This is the measure of how much fossil carbon is released into the atmosphere per unit of energy we use. In our pre-Industrial era we relied totally on energy derived from photosynthesis, which gave us muscle power (serfs, slaves and draft animals) and wood to burn. Although carbon based, it had zero fossil carbon intensity and thus did not upset the atmospheric CO2 balance. But it was such a weak source it condemned most of humanity to grinding, endless poverty. And being geographically diffuse meant that to get more energy demanded more land, which in turn drove our old habit of invasion, conquest and empire. And of course it was also intermittent – some seasons famine stalked the land wiping out decades or even centuries of progress. Most catastrophic collapses of pre-industrial societies have some significant climate/food supply component to them.

The innate deficiencies of this diffuse and intermittent source of energy trapped humanity into a limited development range for millennia. Then we found how to burn coal in efficient steam engines and everything changed. Suddenly we had an intense, concentrated and reliable energy source and on the back of this we built the modern world. Every single aspect of your life that is modern, derives from this single critical invention.

But as we all know, this phase could not be sustained. Burning fossil carbon always had an expiry date on it. This would have doomed our leap into modernity to little more than a short hop into oblivion, but for the discovery of the atom and quantum mechanics. And then for first time we had a source of energy that was concentrated, continuous and has no impact on the natural world. (That our very first attempts to harness it have proven imperfect is no more surprising than the fact that early steam engines were imperfect too. And in both cases engineers learned the lessons and set about evolving their technology.)

It is nuclear power alone that holds the capacity to deliver zero carbon , reliable and ultimately abundant energy to humanity. This is how we drive the fourth term of the Kaya Identity to zero, and emerge from under the threats of poverty, empire, environmental collapse and uncontrolled depopulation – all at once. And as with all of our major technological innovations, it will enable the next major leap in our social development. This is the next stage that takes us to escape velocity – one that de-couples human development from unsustainable exploitation of the natural world.

A world that runs on nuclear energy is one in which geography suddenly matters much less. A nation favoured by climate, coastlines with deepwater ports, navigable rivers and accessible mineral resources no longer becomes the default regional empire. A world in which transport costs are the same almost regardless of location means that mountains, plateaus, wide oceans and deserts no longer condemn a people to isolation and poverty. A world where food, communication, education and opportunity are more or less equally available everywhere lacks only one thing to fulfill it’s promise – a global security order to ensure it’s stability, peacefulness and continuity. Finally humanity might leap from the constraints of it’s collective planet-bound childhood, into it’s adult version – one capable of delivering on so much of the potential we could only glimpse in our turbulent adolescent era.

This is a vision shared by numerous prominent and capable people. Dr James Hansen – the man most visibly identified with the modern climate change movement – has vocally promotes nuclear power as the most valuable tool we have in this crisis. Yet absurdly, irrationally and in the face of all the evidence to the contrary, Green movements globally have clung to an anti-nuclear stance, and perpetuated a fear-mongering campaign of disinformation that continues to mislead the majority of people everywhere.

In this I conclude that a future generation might come to regard the Green movement as the single largest threat to the environment of this period, an obdurate people who while holding to good intentions and professing to want to save the planet – spent decades denying us the one technology that could have easily permitted us to achieve just that.