Yesterday was a dramatic day for Occupy Dunedin.  At 3pm council officials “flanked by a security guard” issued the Occupation with a trespass notice.  The notice set a deadline of 8pm to move out, or each person would face a fine of up to $1000 or prison for up to 3 months (or 6 months, reports vary on this). 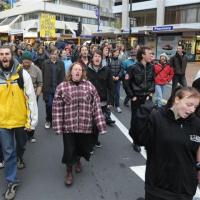 The Occupation called for supporters to come and join them. Several hundred people showed up, and marched around the Octagon. The 8pm deadline came and went with no police action. Asked last night why the trespass notice was not actioned, Mayor Dave Cull said he “had no idea”.

I’ll take a wild guess.  The police didn’t want to forcibly confront the Occupation.  No one wants a repeat of the violence of Occupy Oakland, and the Dunedin police had far too much sense to do it.  My hat is off to them.  The Occupation still has the support of the city, with the ODT reporting that “The marchers were largely cheered and occasionally jeered by onlookers, many of whom had been celebrating Melbourne Cup day”.

Time for Dave Cull – who has so far struck me as a perfectly decent and reasonable Mayor – to reconsider the council’s position on this.  Let the Occupation stay as long as they will. They are making a valid point, forcing into the foreground the issues that governments everywhere would rather not confront.  Final word on this to Dunedin North Labour candidate David Clark:

Last night, I spoke at the Occupy gathering in the Octagon.  I thanked those involved for bringing the Occupy discussion to Dunedin.  I’ve blogged about Occupy before.  It is drawing attention to the growing gap between rich and poor.

In the year to June 2011, Presbyterian Support Otago’s Family Works service provided budgeting, income-related advice and tangible support to 2921 families and individuals. … The full report contains the personal stories of families in Otago living with poverty.  It is a sobering read.

There is no doubt that many are struggling to put food on the table.  But even middle income earners are feeling the squeeze – and perhaps this is why the Occupy movement resonates more widely.  Certainly, Labour’s plan to address cost of living issues is receiving a warm response.

The occupiers were yesterday served trespass notices, effective from 8pm.  It is not clear what the next few days will bring for them.  Whatever it brings, I am grateful that they have provoked a debate about the gap between rich and poor.  Their campsite in the Octagon has given many struggling Dunedin residents occasion to share their growing concerns.