If these trends continue

Key’s government is falling apart, yet one fact remains stubbornly true: walk down the street and nearly 1 in every 2 people you see supports National, while less than 1 in 3 supports Labour (and the 1 in 8 who support the Greens don’t quite make up the difference). When tonight’s Roy Morgan came out I put down my whisky and pulled by my Roy Morgan excel doc. It’s some grim reading.

Labour, at 31%, is right where it has averaged for the entire term. Indeed, it’s right where it averaged for the same period of the last term under Goff (and we all remember that ended in tears). There has been no post-conference bounce: the polls for the three months prior and the two months since average both average 32%. With margin of error, it’s just been more or less flat for years apart from that disaster of a campaign in 2011. Popular policies like KiwiBuild and food in schools just aren’t enough to bring over the voters, Labour is missing something else that they want.

The Greens have sunk back a little in the last three months, averaging 12% compared to an average of 13% in the previous 3 months. Again, basically flat with margin of error. But, combined with Labour over the same period, it’s down.

National’s up to 45% in the past 3 months vs 44.5% the prior 3. Put National vs Labour+Green and what I’m worried about becomes more clear: National averaged a 1.5% lead in the past 3 months, whereas the Lab+Green coalition had a 0.2% lead in the previous 3 months. It could all be statistical noise but what’s clear is that the Left hasn’t been advancing in recent months despite everything that’s happened.

In the longer term (and I know a simple linear regression is inelegant but meh) it’s clear that National’s losses are going to the Greens and New Zealand First: 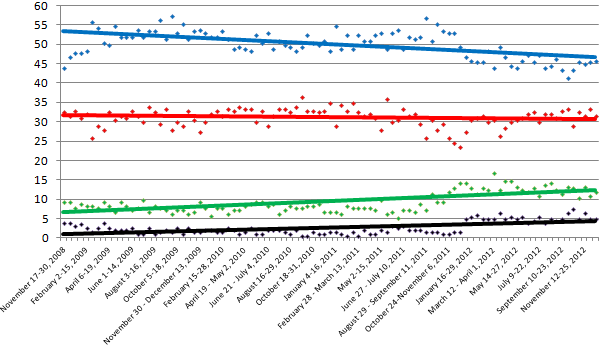 Not to beat a tired old drum, but Labour’s got to step up. It’s Labour’s ex voters that are in the non-vote or National camps. It’s just got to win them back.

Of course, the gap could be overcome if the Greens increase their vote, too. But I think there’s a legitimacy issue too. The public won’t mind if the largest party doesn’t lead the government if the second largest party is only a few percent smaller… but currently National is half again as popular as Labour, it is 15% ahead. That is a legitimacy problem that, if it continues, will hurt Labour in the campaign. Labour needs to be in the late 30s at least with National in the low 40s at most for its leader to avoid a ‘coalition of losers’ tag.

Apparently, after Labour’s numbers recovered from the election drubbing, senior MPs were going around saying ‘if these trends continue, we’ll win in a landslide’. But they didn’t continue, of course. All that was happening was Labour was returning to its post-Clark norm – 31%. If the Left is going to win, Labour needs to break out of that norm, and it starts with dropping the ‘this’ll be easy, it’s my destiny’ mentality those senior MPs were exhibiting.

173 comments on “If these trends continue ”